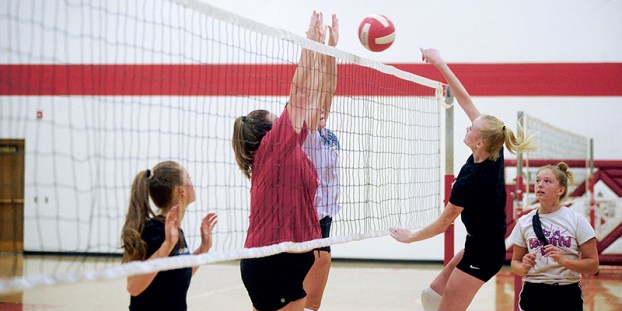 Mary Eich sends a hit over the net in practice in Packer Gym Monday. Rocky Hulne/sports@austindailyherald.com

As the leaves change from green to gold and brown outside, change is also flourishing inside Packer Gym on a Monday night.

The Austin volleyball team has begun its season on short notice after the MSHSL recently announced the season would be moved from spring back to fall. Not only are the Packers dealing with a short window to prepare their squad, which has a lot of new varsity players, they also are incorporating new leadership and new rules as they prepare to play with no fans in the stands this year. 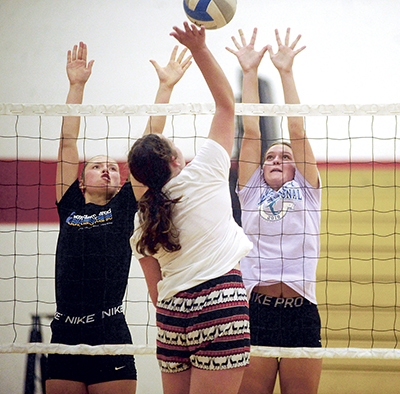 Austin will turn to interim head coach Jaime Mauseth, who is the head coach of the Riverland Community College volleyball team. Mauseth is a 1999 Austin grad and she played volleyball for the Packers and Blue Devils before going on to coach at Centerville, Iowa, and Albert Lea.

When RCC’s season was cancelled and former Austin head coach Lauren Cost stepped down, Mauseth felt the need to come in and help.

“Losing Lauren Cost was a real bummer because she’s a really good coach,” Mauseth said. “I wanted to step in because this is my hometown. I feel like there’s a lot of good volleyball around the area and it can happen around here. I didn’t want the program to go backwards. I’m taking this for one year and hopefully after that someone can step in and keep it going.”

Cost, who is in the Kansas State University athletic Hall of Fame for volleyball, brought the Packers to new heights as the team went 11-16 overall last year. The Packers were 17-34 overall in two seasons under Cost after going 15-92 in their previous four seasons.

Austin senior Isabel Stark said the team is making a lot of adjustments, but she’s happy to have a season this fall.

“We lost a lot of seniors from last year and with a new coach, we’re trying to grow as a program. The more the season goes on, the bigger the goals will become,” Stark said. “I was kind of disappointed when I was told that we can’t have spectators, but at least they can stream the game.”

The Packers have been together a few times this fall and they also had a summer session, but there are certainly more things that are different than the number of things that stayed the same. Austin senior Briella Wempner said the team is looking to get as many players out as possible.

The team doesn’t have a lot of time to worry about the fact that it’s season opener against Mankato East is already scheduled for next Thursday in Packer Gym. It’s just trying to take things one day at a time.

“It’s a new version of normal for us. Being able to have a fall season is kind of like old times. But it’s definitely not the same,” Wempner said. “It’s an adjustment but we’re vocalizing our goals and that’s helped us to stay on task. We’re trying not to get overwhelmed with all of the change, but to just improve as athletes.”

The Packers currently have a 14-match season against all Big Nine opponents that is scheduled to run until Nov. 24. Playing in the middle of a pandemic means there will likely be some surprises in store for the Packers as the season gets going, but Mauseth is trying to keep the team focused on improving.

“It’s kind of crazy,” Mauseth said. “It’s very different and you can’t really plan for anything. We didn’t even plan for the season. I’m a planner and it’s kind of hard for me. It’s a fly by the seat of your pants kind of thing and hopefully it all goes well. We have a great group of girls and the coaching staff is super helpful.”