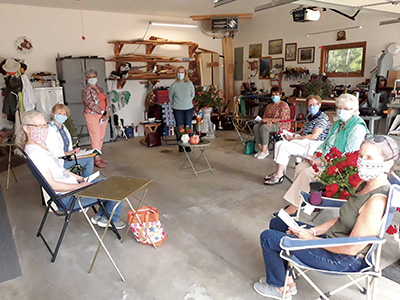 President Sharon Willis called the meeting to order and minutes of the February 2020 meeting were read and approved. There was no old business, however, a number of issues had to be addressed if monthly meetings were to resume, and in keeping with CDC guidelines.  A motion was made by Leone to move the meetings to the Community Room in Brownsdale as opposed to individuals’ homes where a distance of six feet could not be maintained.  The motion was seconded by Shelley Vogel.  The newly elected President will be in charge of requesting the use of the Room from Brownsdale’s City Clerk.

It was also determined that dues for the months of March-August would be suspended and started, once again, with the current month. A charitable gift will not be given by the organization this year, since the treasury balance is so low.  The club will vote on a donation to be given in 2021.

Normally, new officers are elected during the August meeting; however, voting has been a month delayed.  Officers for the 2020-2021 year include:  Rena Perrigo, President; Shelley Vogel, Vice President; and Mary Kidwiler Moritz, Secretary/Treasurer.  Each member, who would have hosted a meeting, will be responsible for sanitizing the Community Room, both before and after each meeting.  Members must continue to wear masks, and no food will be served.  It was determined that meetings will be suspended during the months of January, February and March due to the threat of bad weather.  With these new protocols in place the meeting was adjourned with a motion from Mary Kidwiler Moritz and seconded by Leone.

Sharon was assigned the main topic of September’s meeting and chose to share with the group a proposal to capture and erect the Marconi Wireless Telegraph machine belonging to the RMS Titanic.  Oceanographer, David Gallo, a consultant for the court-approved salvage shipwreck, RMS Titanic, wants to raise the Marconi Wireless Telegraph machine that sent out frantic distress calls on the night of April 14 and 15, 1912 after the ship collided with an iceberg in the North Atlantic, and began to sink.

Saving the wireless telegraph would mean maintaining the “voice of the Titanic.”  Wreckage of the ship is submerged 2 miles below the Atlantic’s surface and has been there for more than 100 years.  Using underwater robots, the telegraph machine would be cut free and brought to the ocean’s surface.  The cost is estimated to be between $5 – 7 million.

Skeptics maintain the site is a mass grave, and are seeking to halt any further removal of artifacts from the wreckage. Gallo maintains retrieving the telegraph machine is necessary for the legacy of the Titanic. He has stated that the company he represents is motivated, not by financial gain, but in preserving the history of the ship.

Shelley Vogel presented the outside reading with a short article mentioning the end of an industrial wind mill facility in Kewaunee County, Wisconsin after only 20 years.  The 14 turbine windmill farm was being decommissioned because it is no longer cost effective.  Left, now, to find alternative means to obtain energy are local farmers who counted on lease payments for an additional, 10 more years, and Lincoln City will lose an $8,000 impact fee.  Additionally, the town of Lincoln will lose a utility aid payment of $39,920. This article was written to alert constituents that payments, promised, can go away with very little notice.