An Austin man who allegedly failed to show up for court ordered drug treatment made his first court appearance on Tuesday in Mower County District Court. 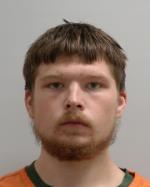 Cody James Bale, 20, has been charged with felony escape from custody.

According to the court complaint, a Mower County detective was notified on April 24 that Bale had escaped from felony custody after being furloughed to a drug treatment program.

The deputy reviewed the release order from the Mower County District Court and observed that Bale was supposed to be admitted to the Minnesota Adult and Teen Challenge treatment facility, but did not appear.

A review of Bale’s criminal record shows prior convictions for theft, theft of a motor vehicle and burglary.

Bale will appear in court again on Oct. 5.