Austin police arrested a 42-year-old Austin man Monday night after he tried to flee on a scooter. 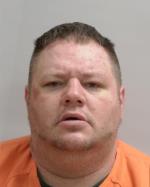 According to Austin Police Chief David McKichan, an officer observed a small trailer scooter at about 11 p.m. on Monday in the 900 block of Sixth Avenue Southeast. The scooter was being operated without headlights or taillights, so the officer attempted to stop the male driver, later identified as Joshua David Bollinger, 42, of Austin.

Bollinger attempted to elude police by driving on the bike trail, through yards, and around construction barricades. Due to the small size of the scooter, speeds averaged only around 20 miles per hour.

Bollinger ultimately lost control of the scooter in the construction zone mud on Fifth Street Southwest. He attempted to flee on foot and was taken into custody after a brief physical struggle that included the use of a Taser.

Bollinger was transported to Mayo Clinic Health System-Austin to be medically cleared and was later released to be jailed.

A small canister of a tear gas compound was located at the scene as was suspected methamphetamine. Bollinger was also processed for a suspected DWI.