‘All smiles on deck’

The Austin girls swimming and diving team needed a mood booster this season and it certainly found one.

Freshman Hannah Keenan may be small in stature and she may never win a race for the Packers, but she has brought the team together in a season where every meet has no direct competition and no fans are allowed at meets due to the COVID-19 pandemic.

Hannah, who has Down’s Syndrome, is a friendly voice to teammates between events and she’s a voice of support during races. Most of all, Hannah gives the team the fire it needs whenever she gets in the pool and swims the 50-yard freestyle.

“When Hannah’s in the water, it’s all smiles on deck,” said Austin senior Molly Garry. “ Hannah’s just a motivator for the team and she always inspires us. She gets out there and does her best every day.”

Garry helped bring Hannah to the Packers when she recruited Emma Keenan, a senior and is Hannah’s older sister, to the swim team two years ago. Emma was running cross country before she came to the swim team and she brought Hannah with her.

Hannah, who has swam for two years, was swimming with the YMCA last year and competed in the Special Olympics, but now she’s taking the competition to another level. She has the energy to compete, but she’s still working on how to dive into the pool and how to turn with a flip.

“It’s fun. I love to swim,” Hannah said. “Practices are harder here than they were at the Y.”

Hannah has buddied up to Austin sophomore Olivia Walsh as Walsh has missed a lot of time with an injury. Walsh has enjoyed her time in the stands with Hannah and she’s also seen Hannah make big strides in the pool.

Emma said she has no choice but to work hard when she sees the energy that Hannah brings, even if it is just for a routine practice.

“When I’m tired and don’t want to go to practice and Hannah always tells me ‘we’re going to practice,’” Emma said. 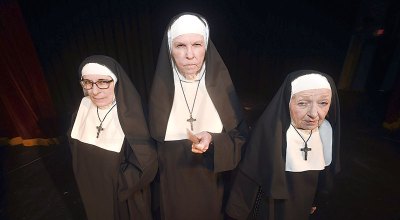