Born April 2, 1922, in Bennington, Oklahoma, Jonita Ruth Bonham attended nursing school at the University of Oklahoma. After graduating, she enlisted in the US Army Air Force and was commissioned a Second Lieutenant. 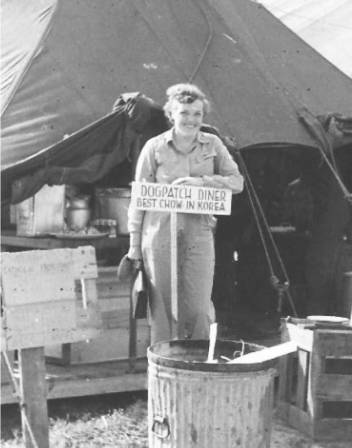 During World War II, Bonham served as a nurse with Air Medical Evacuation units in the Pacific Theater. When the war ended, she served with occupation forces in the Philippines and Japan.

Bonham left the Air Force upon her return home, but volunteered for active duty again when the Korean War broke out. She was promoted to First Lieutenant and assigned as a flight nurse to the 801st Air Medical Evacuation Squadron stationed in Tachikawa, Japan.

The high demand for medical evacuations saw Bonham being flown into the Korean Peninsula virtually everyday, sometimes twice in a day. In the first few months of the war, Bonham logged 245 flight hours and helped in the evacuation of over 600 wounded men. The need for these medical flights was so high that sleep was limited to three-hour catnaps.

On Sept. 26, 1950, Bonham was awakened from a nap to learn she was needed for an immediate evacuation flight. The weather was severe, but the medical crew, along with about 40 soldiers, boarded the Douglas C-54 Skymaster that was bound for Kimpo Air Base near Seoul, South Korea. The plan was to drop the soldiers off at the base and evacuate more wounded men.

Shortly after take off, the C-54 began to lose altitude as it flew over the Sea of Japan. The severe weather was pummeling the plane, which plunged thousands of feet, slamming into the sea and breaking apart. Twenty-three people were killed in the impact, including the pilot, co-pilot, and Bonham’s superior, Capt. Vera Brown.

Bonham was severely injured, fracturing her skull, cheekbone, shoulder and left wrist, but managed to stay conscious. Trapped beneath submerged wreckage, Bonham miraculously escaped and made her way to the surface. Once on the surface, Bonham grabbed hold of a life raft rope.

Trapped in choppy, shark-infested water, Bonham focused her attention on saving the 17 men that survived the crash. Refusing to board one of the two available life rafts until all men were on board, Bonham calmly directed the rescue efforts, having a calming effect on the men.

Only when every man was rescued did Bonham allow herself to be taken aboard a raft. Despite her own wounds, she continued to tend to the wounded men and keep them calm. The group was later found by a Japanese fishing vessel; Bonham directed it to attach a towline to the two rafts, resulting in their rescue. Bonham then lost consciousness and was later revived in a military hospital in Tokyo, where she underwent several surgical procedures on her head.

On Oct. 18, 1950, Far East Air Forces commander Lt. Gen. George Stratemeyer awarded Bonham the Distinguished Flying Cross as she laid in her hospital bed, making her the first woman to receive that medal. She was also promoted to Captain.

Bonham married Major Clifford Bovee in 1951. She remained on active duty, but because of her injuries, she was medically retired from the Air Force in 1952.

Bonham-Bovee’s story was aired on the radio program “Cavalcade of America” on April 9, 1952. It is claimed the 1953 movie “Flight Nurse” is based on her experience, though that claim has been disputed.

Bonham-Bovee passed away on Dec. 24, 1994, at her daughter’s home in Cheyenne, Wyoming.