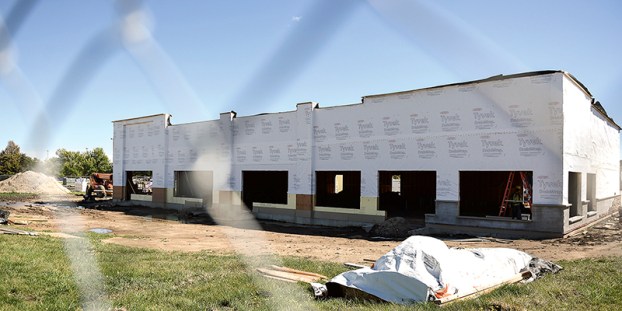 The new strip mall in Austin is coming along as work continues Monday afternoon. Three businesses have already committed with space for a fourth. Eric Johnson/photodesk@austindailyherald.com

Despite complications from the COVID-19 pandemic, construction has been progressing on an outparcel building being built on the old Farmer’s Market lot on 18th Avenue Northwest.

According to Slaby and Associates Vice President Victor Baeten, the goal is to finish construction by November and have tenants moved in and open before the end of the year.

Slaby and Associates is the Verona, Wisconsin-based company that purchased the old Hy-Vee from the Austin Port Authority in 2018. As part of the agreement on that purchase, Slaby and Associates had to establish a new building at the Farmer’s Market lot, located between O’Reilly Auto Parts and the Hy-Vee gas station on 18th Avenue, once the renovation of the old Hy-Vee was completed.

The outparcel building will measure about 6,200 square feet with space to house four tenants.

“The Port Authority and City representatives are excited to see the project move forward,” said City Administrator Craig Clark. “We knew building on the reuse of the former Hy-Vee grocery store would eventually bring further development. Increased traffic helps support other retailers, so that dynamic is playing out well, and ultimately helps build our tax base that much more.”

In January, Baeten announced that three tenants had signed lease agreements. Two of the businesses, Mexican restaurant Qdoba and cellular phone retailer T-Mobile, will be new businesses to Austin. The third, Great Clips, will be relocating from its current location on 17th Street Northwest, next to Sally Beauty Supply.

“We are in discussions off and on with some, but the pandemic has slowed down many real estate growths,” he said. “It’s been a rocky six months. All in all, we will continue to monitor those looking to expand and entertain any conversation as to future development in Austin, Minnesota.”

“We wish the businesses well as we look forward to their opening and new investment in Austin,” Clark said.

Austin woman given free state of the art hearing aids

Beverly Larson is finally going to be able to hear things a little more clearly. After looking for help over... read more