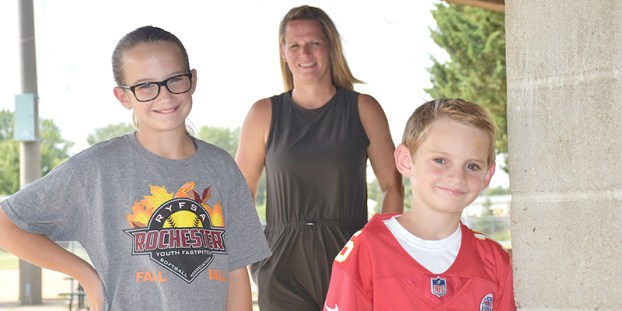 With the world of sports being rattled due to the COVID-19 pandemic, the next generation of athletes are hoping they will soon get a chance to compete. Payton Southard, left, and Ben, right and their mother Dana, center, are all hoping things get back to normal soon. Rocky Hulne/sports@austindailyherald.com

Payton and Ben Southard are just getting started with their athletic careers, but the COVID-19 pandemic has taught them a couple of tough lessons.

Life isn’t fair and patience is a virtue.

Payton, a fifth grader who plays softball, basketball and volleyball, and Ben, a third grader, who plays football, baseball and soccer, have both seen how quickly things can change as they haven’t been in their familiar school setting since mid-March and they haven’t had much time playing the sports they love either.

“I didn’t know I liked school so much until I realized I couldn’t go back,” Payton said. “This has taught me that you have to live your life and try and try and have fun while you can.”

Payton and Ben both said they are comfortable competing in sports right now, but they both know they’ll likely have to wait for at least another year before the youth sports world starts to resemble its familiar structure.

“It’s been pretty boring. We haven’t been able to really do anything,” Ben said. “I’m just so scared that the sports aren’t going to happen.”

Payton and Ben’s mother Dana said that the family had to make big changes to its summer schedule after the pandemic began. One of the hardest cancellations was Payton missing out on a trip to the Science Museum with her class that would’ve happened during the week that schools were closed in Minnesota.

“She’ll never get that back. You have those opportunities that you kind of just miss out on. You try to embrace life while you can and try not dwell on the things that you miss out on,” Dana said.

Payton and Ben have also missed out on plenty of summer sports camps and they’ve found themselves sitting around the house instead of being out on the move with friends. They’ve filled up some of the time by going to parks, swimming and working on arts and crafts.

“It makes you think about and appreciate what you had,” Dana said. “Now that it’s gone, you kind of realize how fortunate we were when we had sports and activities. I know people are appreciating the time that they have at home, but for these two who are active and loving of sports, it’s hard. That gives them their ability to be social, learn new skills and develop. It’s been hard on them.”

Payton was able to compete in a shortened softball season this summer; however, it came with a little bit of confusion. While the Southard’s have tried to limit the number of people they come in contact with, they couldn’t help but notice that others are taking a little bit more laid back approach.

“I think it’s hard being so close to Iowa and the inconsistencies between states,” Dana said. “Early on this summer, Payton played in a tournament in Iowa and it was business as usual and it didn’t really feel that different. Then we came back to Minnesota where we weren’t even allowed to play games.”

Ben is a big fan of the MLB and NFL, but he’s a little worried that those seasons could be halted or stopped by the COVID-19 pandemic.

“I’m kind of scared,” he said. “Baseball is on right now, and I’m thinking that football might happen. But then so many people are getting coronavirus every day and I don’t know if it’s going to happen.”

One positive he has found is the thought of getting back to school and seeing his friends again.

“I probably won’t remember everyone’s name, but I’ll probably remember a few of them,” Ben said.

Payton is also looking forward to getting back to school in September and she can’t wait to get back into playing sports again.

“Playing softball this summer was pretty nice. I knew I wouldn’t get a full season, but it was fun to play,” Payton said. “We’re just trying to play games and have fun.”

The COVID-19 pandemic has been hard on a lot of people, but it’s been particularly hard on the elderly as... read more