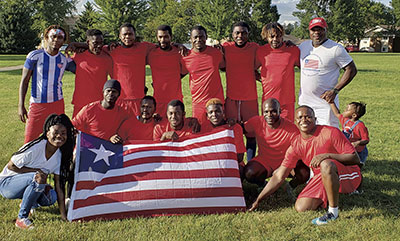 Soccer players with Liberian roots who live in Austin recently played a match against players with roots from Benin, which won the match 6-2. The match honored the 173rd anniversary of the creation of Liberia. Photo Provided

United by Soccer: Liberian natives keeping heritage alive through the game they love

When Joseph Tarpeh moved to Austin two years ago from Texas, he knew he liked the town, but he also knew something was missing.

Tarpeh, who is an immigrant from the country of Liberia, made an early effort to find fellow Liberians. It wasn’t long before he ran into Chris Moore, who was also looking to keep natives of Liberia connected.

For the past two years, the two men have helped run the Liberian Association for Progress. Moore has served as chairman and Tarpeh has served as vice chairman. Tarpeh has four children and Moore has four children and two step children. Together they’ve made a strong effort to keep their families, and the approximately 100 other Liberian natives in Austin, in touch with the culture and history of where they came from.

From left, Joseph Tarpeh, the Vice Chairman of the Liberian Association for Progress, Chris Moore, Chairman of the Liberian Assocation, have looked to provide guidance for Liberian immigrants for the past couple of years. They recently helped set up a soccer match to honor the 173rd anniversary of Liberia becoming an independent country. Rocky Hulne/sports@austindailyherald.com

“If we don’t have the association to expose our children to our culture and heritage, we could lose it,” Tarpeh said. “Regardless of what their accent is, they will always be asked who are your parents and where are your parents from? They’ve got to be able to know something to be able to speak to that. We must nurture our own with our culture and heritage.”

The LAP recently set up a city soccer game featuring the Liberians in town against natives of Benin, another African nation, to honor the 173rd anniversary of the independence of Liberia. Soccer has been the lifeblood in Liberia for quite some time and the country’s current president, George Weah, was named African Footballer of the Year in 1996 after enjoying a long professional career that saw him reach the Premier League.

Liberia is a country in West Africa that was created by Americans as an attempt to repatriate African slaves under President James Monroe, which accounts for its capital city of Monrovia. Liberia became an independent country on July 26, 1847,, electing Virginia born President Joseph Roberts.

While Liberia has yet to play in a World Cup, the sport is ingrained into most of its boys at a young age. A lot of players find their way to the sport whether they were looking for it or not.

“In Liberia, you don’t need an actual soccer ball,” Tarpeh said. “You can put some plastic together and wrap it up in the shape of a ball and you can play with it. Soccer was so common that every boy must have some kind of skill in soccer.”

The Austin Packer boys soccer team has even received a boost from across the ocean in the past couple of seasons as senior striker Henry Tolbert and his older brother, Elton, who played for Riverland last year, both are immigrants from Liberia.

Besides bringing people together, soccer is big in Liberia for another reason. It was a much needed escape for many of its citizens who went through the country’s civil wars covering much of the time frame between 1989-2003. The conflicts left nearly 250,000 Liberians killed and more than one million displaced.

Moore and Tarpeh are both among the many Liberians who were forced from their homes. Moore was in his early teens when he left his family home to move into a refugee camp, where he stayed for six months before arriving in New York in 2000. When he came to New York, Moore met his father for the first time and went on to live in New Jersey, Texas, Iowa and Worthington before moving to Austin five years ago.

Moore has memories of gunfire, confusion, and his uncle being killed in the war.

“I was kind of little then, and you didn’t know who the enemy was and who wasn’t the enemy,” Moore said. “I was very young and it was hard to tell what was going on. I had to learn the American culture when I moved here. It was tough, but we made it. I moved all around the United States from place to place, to have a better life.”

Tarpeh also has memories of the atrocities of the war in Liberia and he still counts the day that he arrived in the United States as one of his best days.

“We were fortunate to survive it,” Tarpeh said. “I can tell you that coming into the United States was one of the best of the things that happened in my life and for the life of my family.”

Since starting the LAP, Moore and Tarpeh have done what they can to make life better for Liberians who are now living in Austin. They’ve handed out free water bottles during the early days of the COVID-19 pandemic, they hold cookouts and fellowship events, they set up a birthday club, where the women of the community all pitch in $20 to offer cash gifts for birthday celebrations, and they have a Merry-Go-Round tradition, where women team up to shower one woman with household products once a week.

“We want to nurture our people,” Tarpeh said.

The COVID-19 pandemic recently left Austin golfer Jordan Wilson without a team, but that hasn’t stopped him from playing the... read more