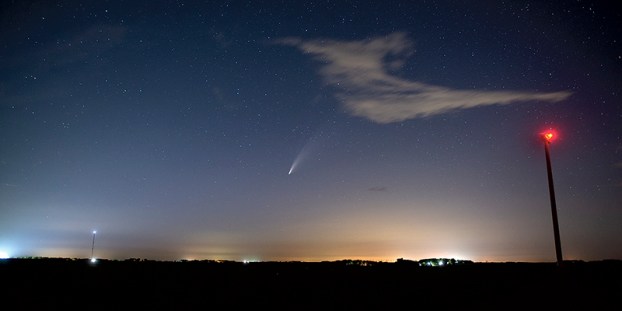 It’s hard not feeling a little bit existential about life after looking at Comet NEOWISE. It’s a special event, not unlike being able to spell existential without looking it up.

Through July, Comet NEOWISE was visible in the northern skies, its long tail streaming out behind it. If you cast any kind of eye at the Internet you will have seen plenty of pictures — most far better than mine, which I captured over Hayfield in the middle of the month.

I say it’s hard not to feel existential because we were looking at an object that will not be seen again by human eyes for close to 7,000 years. To be a little more precise, roughly 6,700 years, though it could be as low as 4,400 years. Either way, that’s a large chunk of change as far as years ago.

Assuming it is the former, what were we doing 7,000 years ago? Well, we were just getting civilization kickstarted during what wis called the Neolithic revolution, which sadly did not include Prince.

During this time, we were getting the basics down by figuring out agriculture. Go us!

Between then and now occurred a lot of things, including the last visit of Comet NEOWISE.

I spied NEOWISE for the first time in mid-July following a Hayfield baseball game. I set up just south and east of Hayfield among the wind turbines.

I make a lot of use of the wind turbines in our area when it comes to photographing the stars. Considering our extreme lack of anything nearby except plenty of flat, the wind turbines are fine stand-ins for mountains … well as good as it’s going to get.

It was close to 10:30 p.m. when I first saw it, just as I was about to give up. A big old swath of clouds was hanging right where NEOWISE was supposed to be and showed no indication of moving away quickly. It was already late and it had been a long day, but just as I was picking up the camera to pack it away, I noticed a bit of fuzz in the sky just above the horizon. Focusing a little closer, I said good evening to NEOWISE.

The detail was lacking with the naked eye, but there it was — directly over Hayfield as I saw it. Focusing the camera, I took my first long-frame exposure — 20 seconds.

When I looked at the picture, there it was, sharp and detailed and amazing.

It was the first time I had seen a comet with my own eyes since Hale-Bopp crowned the skies in 1995. I was in college then and photographed it for a class from a frozen country road just outside of Brookings, South Dakota.

The feeling I got seeing NEOWISE was the same I got from Hale-Bopp. An excitement born of seeing something so far from Earth, yet so close. An excitement that comes from knowing you will not see this astrological object ever again in your lifetime.

An excitement that lets you know you are small.

Space does that to a person if you take the time to truly ponder it. Think about it. NEOWISE’s orbital path is between 4,400 and 6,700 years, taking the cosmic wanderer far out into the Milky Way, which has a width of 105,700 light years and an age of 13.51 million years. Within this space are billions of billions of stars while outside there are millions and millions of galaxies.

I threw all of this at you because I wanted to give you an idea of just how special it is to see Comet NEOWISE. In a universe that is so large, we were given the chance to see something that leans toward a gift from the universe.

Standing on that dirt road outside of Hayfield and seeing NEOWISE was a moment to be a part of the galaxy and universe around us. To contemplate it and my place in it.

It’s an urging that we spend more time looking up and enjoying our simple presence among something so vast and appreciate its beauty.

Earth may be complicated now, but for a few minutes on a bright and clear night, we could look to the stars and maybe know ourselves a little more.

Dear Annie: My husband and I have been married for 37 years. We were separated for five years and, recently,... read more