Austin’s Dawson Mills sits near third base after being called out at third base to end the game in the bottom of the ninth inning. Rochester Mayo topped Austin 6-5 in the Southern Minny Championship in Marucsen Park Friday. Rocky Hulne/sports@austindailyherald.com

The Austin 18U baseball team made the summer last a little bit longer, but couldn’t lock up the Three Rivers championship when they lost to Rochester Mayo 6-5 in nine innings in Marcusen Park Friday night.

Austin had runners on first and second with two outs in the final frame when Andrew Schumacher hit a ground ball towards third base and Dawson Mills was called out for being off the baseline as he headed towards third base. After three hours of baseball and countless momentum shifts, Austin’s baseball season was finally over, but the group of Austin and Lyle-Pacelli players who fought together all season will hold onto the memories they built.

Jackson Oehlfke certainly had a memorable moment as he came up with his biggest hit of the summer by blasting a 3-2 pitch to deep center to double in a pair of runs and tie the game at 5-5 with no outs in the bottom of the seventh inning. Jed Nelson almost drove in Oehlfke for the game winner, but his two out line drive was pulled in on a diving catch in right field.

“I really appreciate the team,” Oehlfke said. “Every game, we gave it our all and we all supported each other. We had some down moments, but we always picked each other up. (That hit) will be up there in my memories. All I had to do is put my swing on the baseball and magic happened.”

Rochester took the lead for good on an RBI groundout by Jack Dunn in the top of the ninth inning. 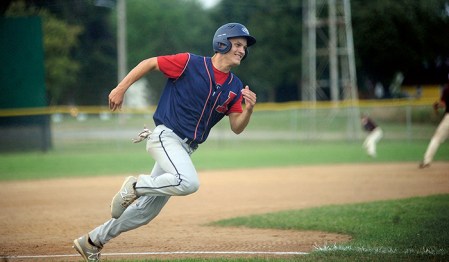 Austin had a chance to win it with the bases loaded with one out in the bottom of the eighth, but Tanner Murphy struck out and Oehlfke popped out to push the game into the ninth.

Cole Walter gave Austin a chance to win the game as he scattered six hits and three walks to allow just one run in four and two-thirds of an inning in a relief appearance.

“I had trust in my teammates. I knew if I gave anything up any runs, my teammates would come back and get some runs for me,” Walter said. “It was really tough (to lose), especially beating these guys in the regular season with most of our starters not playing. It’s tough, but it happens. It’s baseball. Anybody can beat anybody on a given night.”

Austin took a 3-0 advantage when Zach Bollingberg had a two-out RBI single and Murphy knocked in two more with a base hit, but that lead was short lived. Austin left runners on first and second in the fourth inning when Murphy grounded out after Bollingberg singled and Ciola walked with two outs. 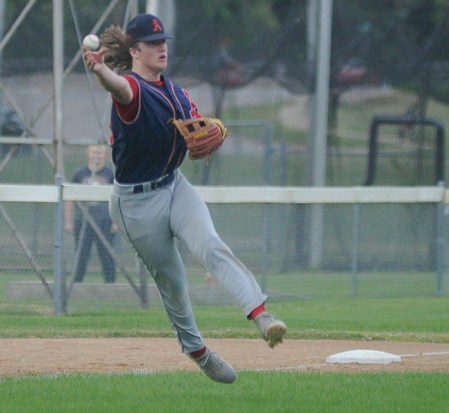 Jackson Oehlfke makes the throw from third base. Rocky Hulne/sports@austindailyherald.com