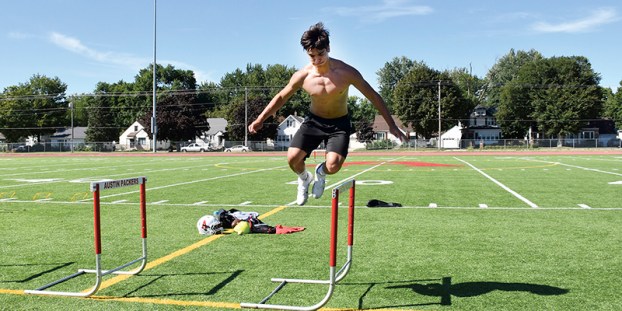 Staying in Motion: The Fritz’s haven’t lost their work ethic in the shutdown

Editor’s Note: This is the first of three stories on families with athletes during the COVID-19 pandemic.

The Fritz family is always on the go, and not even the COVID-19 pandemic has stopped them.

But it has slowed them down, especially after all MSHSL spring sports were cancelled and high school football and volleyball were moved to March. 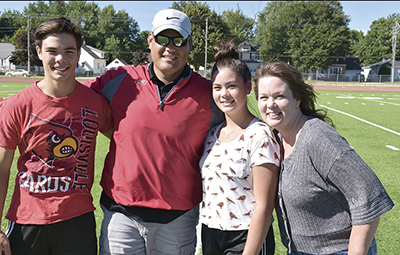 The Fritz family has been one of many across the nation having to adjust their lives due to the affect COVID-19 has had on sports over the past six months. From left, Tommy, Tom, Heather and Alicia. Rocky Hulne/sports@austindailyherald.com

Tom is an assistant coach for the Austin High School football and wrestling teams. His wife, Alicia, is juggling schedules and trying to keep things going at home. Twin siblings Tommy and Hannah, who are both sophomores, are beginning their constant juggle of being three sports athletes.

“It’s been a lot of working out. We’re just using our time to get better,” Tommy said. “I miss the environment of football season and how it forces you to manage your time. Now we have extra time to do whatever we want. We just have to find something to do.”

While he hasn’t been able to wrestle an opponent, compete in a football game or run a race in about six months, Tommy has learned one of his sisters skills: how to flip around like a gymnast in his spare time. Hannah has spent a lot more time painting as she specializes in animals and has grown skilled in her craft.

She hasn’t been able to work on her gymnastics routine since the season ended, but she did have a brief couple of weeks with the volleyball team this summer.

“I’ve mostly been working out at home,” Hannah said. “It was kind of sad when I found out volleyball was moved to the spring, but now I have time to get ready for gymnastics and get stronger.”

Tom said he’s done what he can to keep Tommy and Hannah active, and he’s also hoping they can take steps towards earning their driver’s licenses and landing jobs in their down time over the next few months. He’s also helped the kids stay competitive by setting short term goals for weight lifting.

“One positive thing about it is that they can just take some time to get better and set goals for when their next season comes up,” Tom said. “It’s kind of a blessing in disguise.”

Alicia said the shutdown on sports has been tough on the whole community, but she especially feels bad for the seniors who are now left in limbo – hoping they get the chance to compete this year. As for her own family, Alicia said it has been nice to have much more time to enjoy each other’s company.

“Sometimes we’re going in different directions as parents, but now we’ll have time together,” Alicia said. “Throughout this, we’ve actually been able to have dinner together as a family, because we’re talking with each other every single night. That doesn’t always happen.”

Neither Tommy or Alicia have any intense concerns about competing throughout the pandemic. Tommy said he was ready to play this fall if football had been given the nod to go forward. Now that decision has been made, Tommy is ready for whatever comes next.

“I feel comfortable. I was ready for anything and I’m comfortable with whatever happens,” he said. “You’re usually nervous at the beginning of the season, but you get used to it by the end of the season. With such a big gap in seasons, I think you have to find something competitive to do.”

Alicia said that she thinks Austin fans are ready to help sports happen in a safe manner when they are given a chance to come to games.

“I think people have done a good job of naturally distancing themselves and giving each other space,” Alicia said. “I’m curious as to how the year is going to start without the excitement of football. It would be nice to have something to cheer for as a community, while being distant and observing protocol.”

The Minnesota Department of Health on Tuesday reported two new cases of COVID-19 and one new COVID-19-related death in Mower... read more