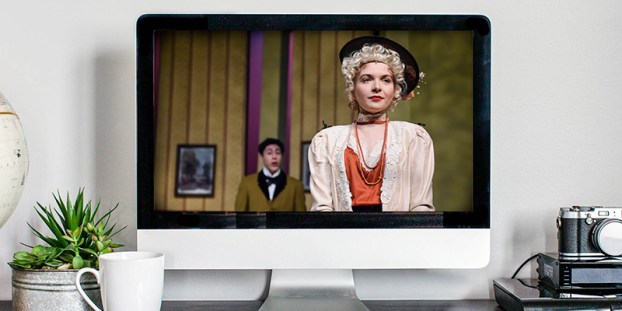 When the COVID-19 pandemic hit earlier this year, Riverland Community College’s Theatre Department was among the first to be shut down.

“We were one week into our rehearsals for our spring musical in March when the campus shut down and we had to cancel the entire show,” said Riverland Theatre Director Lindsey Duoos Williams. “It was incredibly disappointing as we had already put so much work into it.”

With so much uncertainty still remaining as the 2020-21 season draws near, Riverland’s Theatre Department had to improvise and adapt. That meant going to an online platform.

Enter the play “She Kills Monsters” by Qui Nguyen, the first production of the 2020-21 Riverland Theatre season..

“It’s been around for a few years now and was written to be a traditional play, but the author re-wrote the play earlier this year specifically for Zoom performances,” Williams said of “She Kills Monsters.” “It’s sort of neat because it’s the chance to do a script that was written with the intention of being performed on a Zoom-type platform, fully online.”

“I’ve liked the script for a long time when I read the original version of it,” she added. “When I saw that they had created a version specifically to be performed online, that got me really excited.”

“She Kills Monsters” tells the story of Agnes Evans, a high school senior whose younger sister, Tilly, was killed in an accident. When Agnes finds Tilly’s “Dungeons & Dragons” notebook, she begins to explore the imaginary world of fantasy role-playing games while learning more about her sister.

“I love fantasy roleplaying games,” Williams said. “I’m not a big Dungeons and Dragons player myself, but I have played those kinds of games before. It’s a really fun fantasy environment; there’s fairies and elves and ogres. It’s sort of a celebration of geek culture. It’s very funny, but there is also an underlying story about sisterhood and the relationship between these two girls as (Agnes) tries to learn more about her sister after her death.”

The play was a natural fit given the current pandemic situation.

“Everything is so up in the air right now and we didn’t want to make any assumptions about what we would be able to do, and then have to change course part way through,” Williams said. “Having our production full online seemed like it would be the safest thing to do.”

“This is a first for us; we’ve never done auditions like this,” Williams said. “We will be holding auditions on Zoom and in order to do that, people will need to sign-up ahead of time.”

Those interested in auditioning can go to www.riverland.edu/student-life/fine-arts/theatre/auditions/. A sign-up link on the page will allow auditioners to choose which times they want to audition.

Williams estimates each audition will last about 20 minutes.

Performance dates for “She Kills Monsters” are 7 p.m. Oct. 21-25. Information on how to get tickets will be released at a later date.

For more information, contact WIlliams at 507-434-7390 or email Lindsey.Williams@riverland.edu.