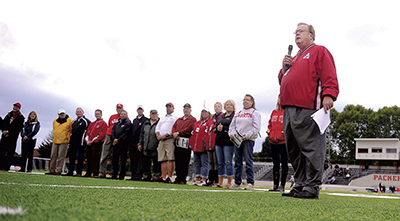 Superintendent David Krenz leads a presentation in August of 2015 to introduce those involved in getting articial turf down at Art Hass Field and the adjacent soccer field before the Packers’ game against Winona Friday night. Herald file photo

Our Opinion: An ideal example of a superintendent

During the August school board meeting, Superintendent David Krenz announced that he would be retiring at the end of the year.

In what will be 12 years in the position, we can say that it’s a well-earned break and anybody coming into the position will have their work cut out for them to fill the shoes he’s leaving behind.

Throughout his tenure, Krenz showed his caring for the well-being of the community’s children, working throughout to ensure the district was taking the necessary steps to continue to grow as an institution of education.

He pushed every employee in the district to be their best and always supported the next steps they took within the school district or their fields.

He was available to those in the district who had questions and was highly valued by this newspaper for his availability and willingness to discuss the issues surrounding the district.

But perhaps one of the best signs of just how much Krenz cared for the students within the Austin Public Schools District was just how visible he was at the different events.

So many times, Krenz could be seen in the stands of a soccer game as well as a band or choir performance. What’s more, there could be multiple events happening in the same night and he would still find a way to get to the events.

On top of all this, we feel Krenz will have left the school in a perfect position to continue hiring a capable and caring administrator, with every possibility that that choice could come within the district.

“I truly believe that you do have the talent in the district to move into this position or if you choose externally, that gives that person the same amount of transition time I had,” Krenz told the board during their August meeting.

APS has had a very good record of promoting from within the district and if APS can do so again, then we believe it will continue the positive trend for the district.

Whether it is from inside the district or from outside the district, we’re confident in the district’s ability to hire the best person for the job and that that person can continue the strong leadership Krenz has shown over his time as superintendent.

“It’s been a good 12 years,” Krenz told the board in August.

Echoes from the Loafers’ Club Meeting A sweater I bought was filled with static electricity, so I returned it to... read more