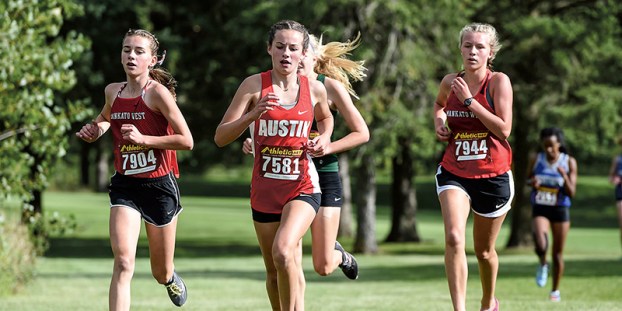 Austin’s Nadia Vaughn runs with a group at around the midpoint of the girls race in 2019. Herald File Photo

The Austin cross country team is ready to run, but the path is going to look different this year.

Austin is moving two of its three home meets to the Mower County Fairgrounds. Fans will be kept at a safe distance and fewer runners will occupy the course at the same time.

With the new host site, Austin head coach Tony Einertson is spending a good amount of his time setting up a new course at the fairgrounds. The track, which will include two and a quarter loops, will start at the north end where the rides usually are and will advance through to the fair grandstand area.

Einertson said the idea of having the duals at the fairgrounds is to keep Meadow Greens open for golfers when there will be a limited number of runners competing.

“It’s wonderful that the fair board and the county are allowing us to do it,” Einertson said. “Setting up the course is really no different than what I would do at Meadow Greens. I enjoy doing it. It gives me a chance to run and I get a feel for the course.”

All varsity races will have no more than 24 runners, with each team allowed to use a maximum of 12 runners. All JV races will feature staggered starts, with a second wave of runners starting one minute after the first wave.

All MSHSL outdoor events are limited to a maximum of 250 fans this fall and fans at cross country meets will be asked to distance themselves from the runners and each other. There will be no fans allowed near the starting gate or the finish line.

While fans are welcome, they are being encouraged to give runners their space.

“It has become all about safety at this point. We’re getting a chance to compete and I’m really looking forward to it,” Einertson said. “These kids have never done this before and neither have I. It’s going to be an interesting thing.”

The Austin cross country season will wrap up at the Big Nine meet in October on Oct. 8-9.

Games stop again, this time players decide when they resume