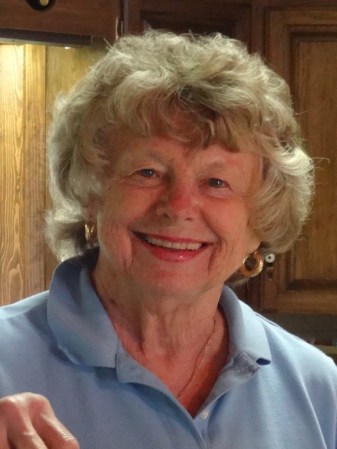 A beautiful life on earth has ended; Meem passed away peacefully on August 7th 2020 at the age of 90. Meme was a vivacious, creative, strong, loving, devoted and compassionate soul who will be missed dearly by all who knew her. She lived life to the fullest and shared her creative gifts with generosity and joy.

Meem was born Marian Louise Wahlquist, October 10, 1929 in Mpls, and grew up just a few blocks from Washburn High School. She loved her high school years and was Washburn’s first Homecoming queen, fall of 1946, and graduated class salutatorian.

Meem attended Carleton College where she met her true love, Ray, her sophomore year – it was to be a 72-year love story. Upon marriage and graduation they settled in Austin, where they raised their family of four children. Tragically, they lost their eldest daughter, Peggy, at age 21 in a devastating car accident in 1975.

Meem loved to travel, and she accompanied Ray on many overseas trips and other trips with dear friends. Upon Ray’s retirement from Hormel they moved to Wellington, N.Z. for two years and to London before resettling in Edina. But by far their favorite home was their lake cabin near Hayward WI. There, summers were filled with happy times shared with dear friends and nine exuberant grandkids.

Meme’s greatest joy was making gifts for others. She loved knitting sweaters and afghans for all the grandkids. She also made beautiful quilts that adorn many of the beds at the cabin. But her true passion was cooking. Meme took great pride and joy in preparing delicious meals for Ray and the family at the cabin. For Christmas one year she gave everyone a special “Meme Cooks” cookbook of her favorite recipes.

Family and dear friends were at the center of Meem’s life. She and Ray treasured their cadre of friends in Austin as well as their life-long friendships made while at Carleton. But family always held the prime spot in her heart. She nurtured wonderful family times at the lake cabin and helped to create memories that will be cherished by all.

Meme is with her beautiful daughter, Peggy, now. Her love lives on through us.

In her memory, we ask that you consider making a donation to “Carleton College in memory of Meem Asp (1951)” or to an organization or a cause that holds meaning to you.