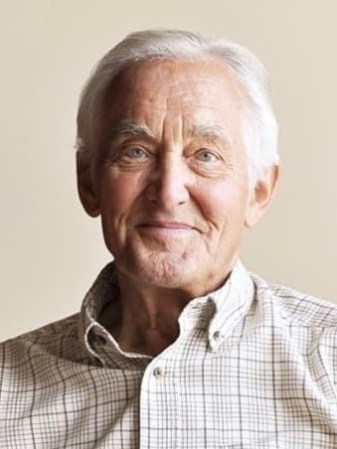 Lawrence F. “Larry” Runtsch passed away peacefully on August 15 after a “long goodbye” while suffering the effects of Alzheimer’s. He was 89. He was born in 1930 on a family farm in rural Walnut, Nebraska, near the town of Verdigre, to Albert F. Runtsch and Anna M. Czekay.

His father died when Larry was just five years old. In the midst of the Great Depression, he and his mother moved into Verdigre for work and then on to St. Ansgar, Iowa. He graduated from St. Ansgar High School in 1947 and, not long after, began his life-long career at Hormel Foods in Austin, Minnesota.

On August 5, 1950, he married the love of his life, Margaret A. Duenow, of St. Ansgar. He entered the United States Marine Corps and the two of them moved to Southern California.

After Larry’s service in the Marine Corps, he went back to work at Hormel. He was working in the transportation department when, in 1965, IBM offered an aptitude test to Hormel employees to be part of the team that would operate Hormel’s new computer system. Dad scored high on the test and for the rest of his career he served as a computer programmer and part of the data processing department of Hormel. He retired from Hormel in 1991.

Larry and Margaret were blessed with the birth of six boys, Steven, Joel, Michael, Terry, Randall and Timothy. The family enjoyed many weekends tent camping near Lake Francis in southern Minnesota, as well as many car trips around the United States. After retirement, he and Margaret moved to Wabasha, then Lake City, and finally Rochester, Minnesota. They wintered in Arizona for over 20 years.

Larry was an avid wood worker, handyman, fisherman, hunter, and outdoorsman. He was a health food nut before it was cool. He valued hard work and family. He taught his sons many life lessons that they still carry with them today. He had a living faith in Jesus Christ and was a member of Redeemer Lutheran Church in Rochester, Minnesota.

Larry was preceded in death by his parents; his two brothers, Albert and Clarence; his sister, Leona; as well as two of his sons, Terry and Mike. He is survived by his dear wife of 70 years, Margaret; and his sons, Steve (Sheri) of Cottage Grove, Minn.; Joel (Debbie) of Austin, Minn.; Randy (Kazumi) of Rochester, Minn.; and Tim (Ann) of Fort Collins, Colo.; Mike’s wife Diane; as well as 12 grandchildren and three great-grandchildren.

Due to the current Covid-19 pandemic, the family has decided to postpone a memorial service to a later date. Larry’s remains will be laid to rest at the St. Ansgar Cemetery in St. Ansgar, Iowa.

Memorial contributions in Larry’s honor may be made to Redeemer Lutheran Church, 7755 Greenstone Trail, Fort Collins, CO 80525, where Margaret is now a member, or to the Alzheimer’s Association, 225 N. Michigan Ave., Fl. 17, Chicago, IL 60601.