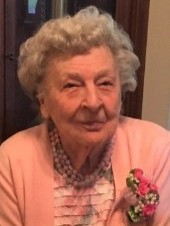 Katherine M. Seiver, age 103 of Austin, Minnesota, passed away Saturday, August 15, 2020, at Our House Assisted Living in Austin. Katherine Marie Thorn was born May 20, 1917 in Staples, Minnesota. She was the youngest of 12 children born to Enos Woodruff and Catherine Augustus (Ringler) Thorn. Katherine grew up on the family dairy farm and learned to dance at the many barn dances her father hosted. She graduated from Staples High School in 1936 and shortly after moved to Lansing, Minnesota, where she lived with her sister, Elizabeth “Toots” Thomson and her family. During this time, she worked at Arrett’s Department Store as a salesclerk. She attended dances at the area dance halls, and it was at the “Oasis” she met Lloyd Seiver. They were married in 1937 and kept dancing until his passing in 2006.

Kate kept busy raising her three children and was a stay at home mom until the two youngest were in Jr. and Sr. high school. She then worked at Sears as a salesclerk and Bill and Ruby’s Laundromat as an attendant. Katie also kept busy on a bowling league for years at Echo Lanes, golfing at Ramsey and snowmobiling in the winter. She was also an avid card player and was an excellent bridge player. Katherine was a 50+ year member of Unity Chapter #29 Eastern Star and First United Methodist Church, where she was active in Circle for many years. Most of all Katherine loved her family, she was the best mom and grandma anybody could have. Katherine, along with Lloyd, enjoyed their dear friends who pre-deceased her. The old “gang” is now all together again, having golf outings, vacations, and steak fries.

Katherine is survived and will be dearly missed by her son, David (Jane) Seiver of Riverside, California; daughter, Lani Seiver of Austin, Minnesota; 7 grandchildren, Mark, Holly, Dan, Garren, Brent, Renee, Brandon; 6 great grandchildren; sister-in-law, Millie Seiver; nieces and nephews. She was preceded in death by her parents, Enos and Catherine Thorn; husband, Lloyd Seiver in 2006; son, Dale Seiver in 1976; and 11 brothers and sisters.

A visitation will be held from 1:00-2:00 p.m. at Worlein Funeral Home in Austin, Minnesota, on Tuesday, August 18, 2020, with a graveside service to follow at Grandview Cemetery in Austin. An Order of Eastern Star Service will follow the visitation prior to the graveside service. Services are prearranged and performed with Worlein Funeral Home of Austin. Condolences may be expressed to the family online at www.worlein.com.