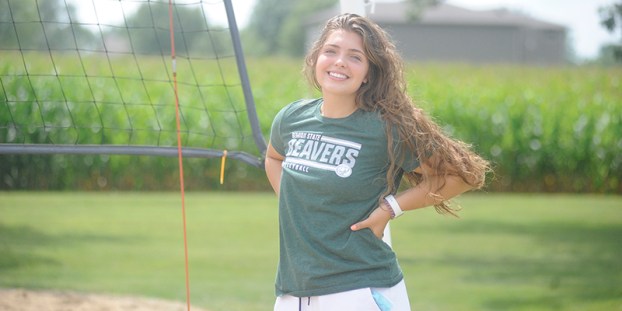 BLOOMING PRAIRIE — Blooming Prairie senior Micalyn Trihus may come from a small school known more for its football and basketball teams than volleyball, but that didn’t stop her from going out and making it to the next level in the sport she loves.

After putting all of her athletic focus on volleyball over the past four years, Trihus will be playing Division II volleyball at Bemidji State University with an athletic scholarship. She made her commitment to the Beavers in June, but she had her mind set on BSU back in March.

“Bemidji clicked right away,” Trihus said. “I loved talking to the coaches, I made a visit up there and I loved it. It’s hard coming from a small school, but if you’re willing to put in the work, you will find people that will put in work for you.”

Trihus has served as an explosive hitter over the last two seasons for the Awesome Blossoms as she’s put up 540 kills, 321 digs and 80 ace serves. While she’s done big things for BP, Trihus credits much of her improvement to playing club volleyball in Burnsville, where she played for the Northern Lights and teamed up with Edina, Lakeville North and Farmington. 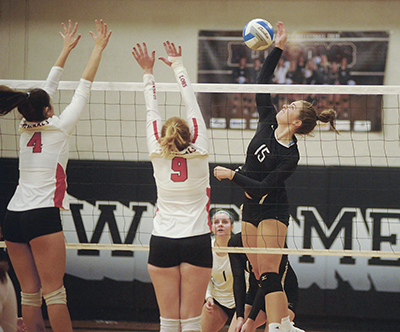 Micalyn Trihus goes up for a hit against LeRoy-Ostrander in Blooming Prairie. Herald file photo

Trihus has a summer birthday, which means she has played against players who are older and sometimes stronger than her in the Twin Cities.

“It really helped push me to work harder. I didn’t use my age as an excuse and I tried to use it to play at their level,” Trihus said. “There were times when I left crying from practice, but this was such a breakthrough year for me. I learned to treat it like a sport, but also like a job. It’s still fun, but it’s important and it’s not to come in and goof around. You need to be in it if you’re going to be in it.”

Trihus triggered her own recruiting process by emailing as many schools as she could about playing volleyball. Her hunger grew last year when she saw some of the players she played with and against making their own college commitments.

As the COVID-19 pandemic has slowed down the recruiting process for athletes of all sorts, Trihus is thrilled to have her college future locked down.

“I feel bad for people who haven’t found a college. I know (BP senior) Megan Oswald’s basketball recruiting got cut short and I can’t imagine how stressful that would be,” Trihus said.

Trihus took about a two week break from workouts when the pandemic first hit, but soon she was back at it, putting in all the time she could find to prepare herself for the next level. It’s the same work ethic that Trihus has had, ever since she went to a volleyball camp at the age of 14, where she was told she should consider playing club volleyball.

“I fell in love with the game when I started playing it, especially when I started competing at the elite level,” Trihus said. “It’s a different energy than playing high school volleyball, because I’m pretty small up there and I’m pretty big down here. It takes the competitiveness up so much higher.”

While she will have to wait for spring for a chance to play for BP this year, Trihus said the Blossoms could do some big things on the court.

“With the attitude in the gym and the effort being given, I think Blooming is going to really be something tough to deal with this year,” she said.

As for her unique first name, Trihus recently found out that it was literally delivered to her family in the mirror. While her dad’s name is Michael, he received a piece of mail with the name Micalyn on it two weeks before Trihus was born, and that became her name.

“My mom started calling him that and then they just went with it for my name,” Trihus said.

The Beavers play in the Northern Sun Conference, which recently suspended the play of all sports through Dec. 31.

The Austin City Council unanimously approved a motion to forward a vote on the City participating in the Mower County... read more