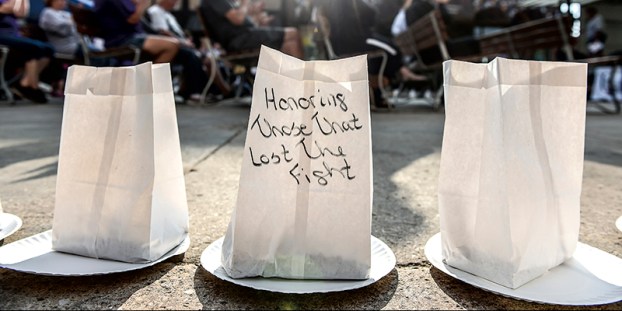 Even though this year's Relay for Life has been canceled organizers are working hard to continue the effort through the end of the year. Herald file photo

With the annual Relay for Life event canceled, organizers are looking for ways to continue with fund-raising

So many things this year have unfortunately been taken away because of the COVID-19 pandemic. The Mower County Relay for Life is no different, but organizers are keen on letting people know that just because the annual event has been cancelled, the spirit and hard work has not.

This year’s relay was to have taken place on July 24 in downtown Austin. Organizers held out as long as they could but in late June it became clear the event would not happen.

“Part of the whole thing would be the survivors — many wouldn’t have come out any way,” said Cheryl Retterath. “They wouldn’t have taken the chance of being out in the crowd.”

The development will undoubtedly hurt fundraising efforts, so the national organization of the American Cancer Society has extended fundraising through Dec. 31.

“Normally donations end the month after (the relay),” Retterath said.

With the Dec 31 deadline in place, however, organizers are going full steam ahead in order to make the best use of the time as possible, though it’s not without its challenges.

The relay is going fully viritual this year, with those wishing to give directed to online donations or sending in their donations.

They recognize that many of those fighting cancer and donating are elderly and may not be as familiar with the technology end of things.

“That was the difficult part,” said Evan Sorensen. “Trying to get in some cases the older generation to participate. They might not be able to access the internet or know how to do that. A lot of our bigger contributors are the older population.”

At the same time the group wanted to still engage the younger populations and to do that, the technology is invaluable.

Instead of one big event, the group is brainstorming smaller events throughout the rest of the donation period. That includes still making use of the luminaries, which played a central part of each relay.

“Right now we’re kind of toying with the idea of instead of doing luminaries downtown like we did, we pick a night, maybe a Sunday night, and have people light luminaries in their own front yard,” Retterath said.

That idea has turned  to reality when the group finalized plans recently to go ahead with the event at 7 p.m. on Nov. 1, under the theme of “Light Up Your Street.”

People are encouraged to get their luminaries at LIFE Mower County from 9 a.m. to 4 p.m. Monday through Thursday. People can also pick up luminaries by contacting committee member Angie Hughson at 440-7818; however, people must call first and a pick-up will be arranged outside of the house.

On top of the difficulty of keeping people involved is knowing that times are difficult for many and will inevitably play a part in how much is raised. Initially, before coronavirus began altering the social landscape, organizers set a goal of $38,000. It’s doubtful that goal will be reached, but organizers are urging people to give what they can.

“We’re encouraging people to donate,” Sorensen said. “We understand it’s a difficult time with the economy and unemployment but any dollar helps.”

Another change the relay has made is to do the fundraising as one group rather than teams.

Regardless of how the rest of the year breaks down, the organizers behind the Relay for Life know that to some degree the community and county will be supportive of the effort.

“As a cancer survivor myself, it’s important that the community embraces the concept of all in one,” Sorensen said. “We shop local, try to buy local items, try to donate locally to different fundraisers. There are a lot of cancer survivors in Austin and almost everybody has been touched by it. If you can donate money, it’s going to help.”

It’s a lead by example sort of method that organizers hope will push Austinites to donate what they can.

“Cancer never stops,” said Angie Hughson, to which Retterath followed up by saying, “So we’re not going to either.”

If people still want to donate, they can do so by visiting https://secure.acsevents.org/site/STR?fr_id=97164&pg=entry. Or they can send a donation to: Sterling State Bank Lyle, C/O Cheryl Retterath, 403 First Street, Lyle, MN 55913.

A question of planning

Now that a decision has been made to proceed with prep sports, FB coaches now have to figure out the... read more