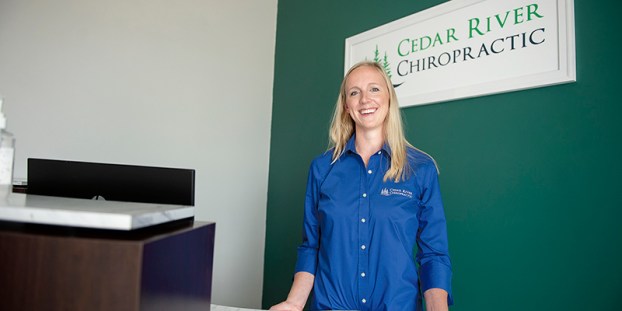 Dr. Tiffany Davis has just opened up Cedar River Chiropractic starting today with her office located in the same location as Total Fitness, located at 1700 17th Street NW, Suite B.

“It’s always been a dream of mine to have my own clinic,” said Davis, just two days before her clinic opened. “I really wanted to work under people to learn the business side of things. To learn how the clinics are run.”

Davis will be open three days a week from 8:30 a.m. to 5 p.m. as she splits time between Austin and her current job with Pirkl Chiropractic in Rochester, where she’ll remain two days a week.

Davis isn’t new to Austin as she spent five years with Bollingberg Chiropractic before moving over to Pirkl in Rochester, where she’s been for three years.

Her love of the chiropractic profession goes back much further to when she had back issues of her own as an eighth-grader. She may have had dreams of what she became earlier, but after a few visits with Dr. Carol Walters, her path was set.

“I loved it all the way through,” Davis said of her journey. “I’ve always been very interested in health, wellness and the human body. My whole life it’s been interesting.”

However, it wasn’t until she had her twins last year that she began thinking about the idea of opening her own profession.

Davis described the pregnancy as difficult requiring a hospital stay of seven weeks. That time provided plenty of opportunity for thought.

“When you live there, you have a lot of time to think about what you’re going to do. You think a lot,” Davis said. “I think it’s time to start looking into that more. An opportunity to have this place come up at the right time for me.”

Davis’ attraction to chiropractic medicine comes from a more holistic approach that goes hand-in-hand with  the complexity of the human body.

“I like that it’s a more natural approach to health care,” she said. “We don’t prescribe any medications. We work together with different fields to give everybody a well rounded treatment and wellness plan.”

Which could work out to the advantage of Davis’ patients. Both the Yoga Studio of Austin and Lewis Physical Therapy and Fitness are next door to Davis.

“I do really like that we do have a really easy referral,” Davis said.

For sure though, it’s not an easy time to start a business, so she’s taking a two prong approach that will allow for both patients and the necessary cleaning.

“I like to see patients and get people in the door, but I also take my time more with people,” Davis said. “Get to the root of what’s going on.”

That’s not to say that she doesn’t have an eye on the future and the possibility of going full time in Austin, but for the time being she’s just excited to get her own clinic up and running.

“I’m very excited,” she said. “To see it come into fruition is huge. Even to walk through the clinic now and seeing it getting completed really makes you feel like your getting ready and doing something.”

Those interested in scheduling a visit can call 1-833-433-2225; however, make sure you are including the “833” area code. It’s a toll free number and not a local number. Another way to schedule a visit is by doing it online at www.cederriverchiro.com.

The Port of Elkton hoping to recover after late June fire Late on the night of June 30, Michael and... read more