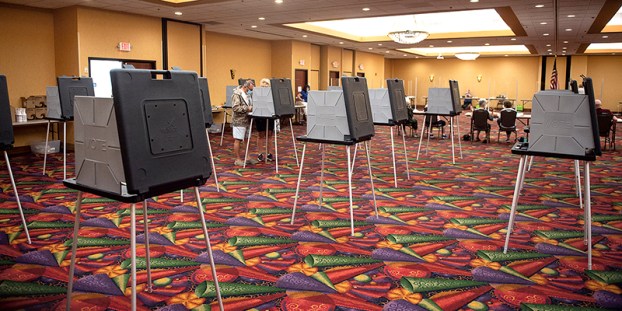 Voters stand in the middle of spread out voting booths at the Holiday Inn and Convention Center during primary voting this past August. Herald file photo

With all precincts reporting in Austin, Steve King and Jeff Austin currently lead in the mayoral primary.

The top in the race advanced to the Nov. 3 election with the winner replacing current Mayor Tom Stiehm, who announced earlier this year that he would not seek another term.

The primary also served as a first run in the COVID-19 era voting, where in Austin everything was condensed into the Holiday Inn Convention Center. Election officials say it’s a good first run.

On the Republican side, Jason Lewis has a clear lead, collecting 179,786 votes (78.15 percent) and will likely be the chosen candidate to face Smith this November.

Officials are estimating that Mower County’s tally will be close to wrapped up on Thursday with an eye to verify on Friday. The state will then verify the results next Tuesday.

Voting under one roof