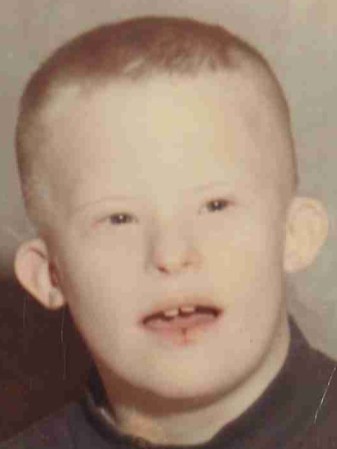 Dave was born April 11, 1958 in Austin, MN to Francis and Lorraine (Meyers) Reding. He was the youngest of their three children.

He grew up on the farm in rural Austin where he enjoyed the outdoors, playing ball and taking an occasional horseback ride. He moved to Austin with his parents in 1983. Dave attended Oak Grove Center and Brownsdale Public School. He returned to Oak Grove Center and stayed till its closing. He then started his thirty-year career with Cedar Valley Rehab Services. He especially enjoyed working at Riverland East Campus cafeteria.

Dave enjoyed eating out with friends and family, activities at ARC, especially the bowling league. He attended camp at Caledonia for many years. His special enjoyment in life was watching sports on TV, especially the Minnesota Vikings. If they scored, that was good enough for him.

Dave is survived by his sister, Susan (Charles) Peterson of Austin; brother, John (Louise) Reding of Phoenix, AZ; nieces and nephews; housemates, Wayne and Steve and the Sandalwood Staff.

He was preceded in death by parents, Lorraine and Francis Reding; housemates, Larry and Todd.

A special thanks to Cedar Valley Staff, Mayo-St. Mary’s Staff and the Mayo Hospice.

To the REM Staff that cared for David the last twenty-four years, and especially the last two weeks, his family is extremely grateful.

In lieu of flowers, memorials preferred to donor’s choice.

There will be a graveside service, 11:00 AM on Thursday, August 20, 2020 at St. Peters Catholic Cemetery in Rose Creek, MN with Father Prince Raja officiating.

Remember Dave in your Prayers…

Condolences may be left at www.mayerfh.com