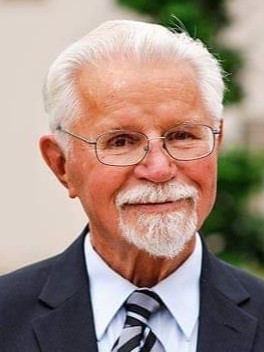 Dale Duane Peters, 90 years of age, formerly of Austin, Minnesota, passed away in Mesa, Arizona on July 6, 2020 to go to the ultimate ice cream parlor in heaven.

Dale was born on December 14, 1929 in Omaha, Nebraska to Herbert and Myrtle (Vosler) Peters. He graduated from Fremont High School with the Class of 1947. In addition to working during his high school years, he was active in wrestling and Golden Gloves boxing. He went on to serve his country in the United States Navy aboard the USS Keppler during the Korean Conflict. He married Joan Hobart in 1952 and they were blessed with three daughters. Joan passed away in 1998.

Following his honorable discharge in July of 1954, Dale returned home and enrolled in Midland College in Fremont. While attending school, he began working for the Hormel Company. His career with Hormel included transfers to Des Moines and eventually to the headquarters in Austin, Minnesota. Dale retired from Hormel in 1987 after 38 ½ years in the transportation department.

On April 1, 2000 Dale was introduced to Patricia Cafourek Cooling, and they were united in marriage on February 10, 2001 at the Monte Carlo in Las Vegas, Nevada.

Dale was an active member of the First Congregational Church in Austin. He was also a member of Masonic Lodge, the American Legion and the Nebraska Jaycees.

He was an avid cribbage player and liked walking to the Senior Center for a game or two. Dale spent many summers in the North Woods on Boundary Waters canoe trips with family and friends and also at the Pine Tree Cove Resort on Lake Kabetogama. Dale traveled the world with family and especially enjoyed cruises and European tours. Many people will remember Dale’s favorite lifetime motto of “No Problem”.

A private family memorial service will be held. Public visitation will be at Clasen-Jordan Mortuary on Saturday, August 8th from 1:30 to 3:30 p.m. Interment will be at Oakwood Cemetery with military rites by Austin Post #91 American Legion. Social distancing and masks will be observed.

Memorials are preferred to the Alzheimer’s Association or First Congregational Church.