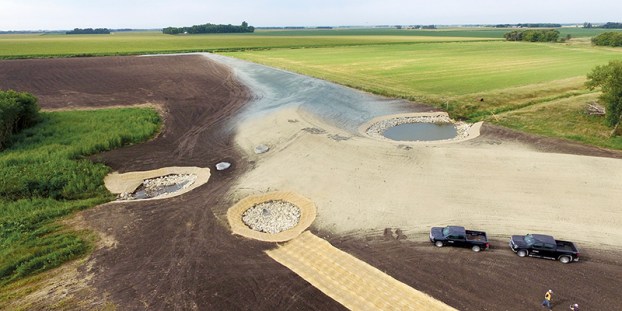 Drone photo of some of the work that led to reducing floodwaters. Photo provided

Five years ago this month, local leaders met at the confluence of the Cedar River and Dobbins Creek to announce a $3.2 million grant for improving water quality and reducing floodwaters.

At the time, the Cedar River Watershed District vowed to match that grant from The Hormel Foundation for an overall $6.4 million initiative to achieve an eight percent reduction in stormwater flows at the Cedar-Dobbins confluence (“The Point”) by 2020. This was part of the Austin Vision 2020 community improvement initiative.

Today, CRWD has surpassed that goal by achieving at least a 10 percent flow reduction at the Cedar-Dobbins point now that construction has finished on creating the district’s biggest project to date – Dexter 30-Dam 2. Spanning nearly 2,000 feet long with a peak berm height of 21 feet, the $1.2 million structure is now fully functional for temporary storage of stormwater in the headwaters of Dobbins Creek’s south branch.

“We’re excited to have topped our goal but also eager to continue making progress in the Dobbins watershed to reduce the negative effects of its flash flooding,” said Cody Fox, CRWD project manager. “We could not have achieved this without The Hormel Foundation, State of Minnesota, townships and numerous cooperating landowners.”

With a heavy focus on the Dobbins watershed prone to flash flooding, the district’s CIP projects have drawn the interest of the National Weather Service out of LaCrosse, Wisconsin, after staff there recognized that a flood gauge on Dobbins in Austin was not reaching levels that it normally would during rain storms. The NWS is reviewing CRWD’s data to determine if its flood modeling needs to be updated to account for the positive effects of the district’s projects.

With the latest project – the only one planned this year – and another project finished in 2019 just upstream from it, CRWD now has two earthen berms in South Dobbins Creek’s headwaters that can slow and treat stormwater coming from 1,240 acres of mostly cropland. The berms can capture enough stormwater to cover an area up to three times larger than Austin’s East Side Lake, a dammed stretch of Dobbins.

When the area gets about eight inches of rain over 24 hours – roughly what’s considered a “100-year flood” – the Dexter 30 berms will temporarily hold stormwater covering nearly 100 acres or about 2.5 times the acreage of East Side Lake. At capacity, stormwater will cover about 120 acres with enough water to fill a 550-foot-deep pool the size of a football field.

CRWD originally planned for 25 projects with the CIP initiative but, as opportunities have arisen for larger, more-productive projects, the overall value delivered by fewer projects has far exceeded the original plan.

CIP projects are funded by a $3.2 million grant awarded by The Hormel Foundation and nearly another $4 million thus far in funding from state grants and state bonding. Up to $1 million from a CRWD local project levy is available, if needed.