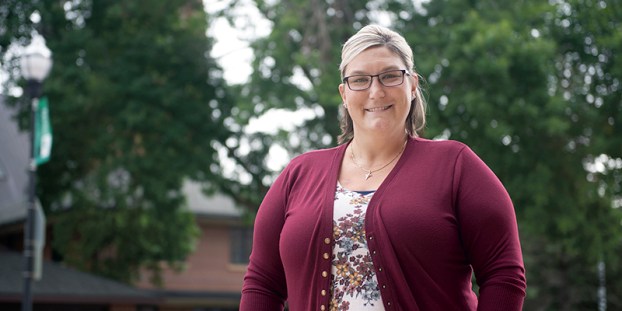 Andrea Severtson went through a battery of chemotherapy treatments and has come out stronger on the other side. She is this year’s Relay for Life Honoree Chair. Eric Johnson/photodesk@austindailyherald.com

In many ways Andrea Severtson’s story of cancer is no different from that of others, but go a little deeper and her story becomes an intense journey through one of the scariest times of her life.

Severtson was named Mower County Relay for Life Honorary Chair earlier this year, and even though this year’s event was cancelled, her story still serves as an inspirational example of survival.

This story begins in 2018, when she discovered her first indication that something was wrong.

“In March of 2018, I had noticed a lump on the right side collarbone,” the Pacelli administrator/enrollment coordinator said. “I didn’t think anything of it. I thought maybe it was just from strep. I decided to go in and found out two weeks later it was Hodgkin’s lymphoma.”

“My journey started from there.”

Hodgkin’s lymphoma originates from a certain type of white blood cell and is generally considered to be a treatable as cancer goes, but unfortunately in Severtson’s case things became complicated.

First, Severtson’s doctors embarked on a straightforward round of chemotherapy over a six-week period of time.

For three weeks, Severtson went through the treatment schedule, but a PET scan during her fourth treatment showed a new spot on her chest called refractory relapse, which is when the treatments don’t work and the cancer continues to grow.

“It just wasn’t working,” Severtson said. “I got into several different trials where I stayed in the hospital every 21 days for three days. I had chemo all three days.”

The positive side was that this form of treatment started to show results, but it wasn’t working as good as they hoped.

At that time, doctors opted for a much more aggressive strategy that literally meant she would be born again.

Severtson would have her blood drawn and then separated by using an apheresis machine. For seven days her blood was put through the machine in order to separate out her stem until 10 million cells were collected. The cells were stored and frozen.

Once that was done, Severtson went through high-dose chemo, essentially setting her back to zero — like the day she was born.

“They killed everything inside me so I was back to square one as if I was a newborn,” she said.

This was followed by her own stem cells reintroduced to her body, leading to a very long period of recovery that left her extremely ill.

“I had to live in Rochester for a month,” Severtson said. “I had to go to the hospital every day. I was so sick then, to the point I couldn’t do anything on my own.”

After the month was up, Severtson was allowed to go home and as of this coming Sept. 26, it will have been two years since the stem cell transplant and currently cancer-free future.

Not that it isn’t still on her mind.

“A lot of cases people do relapse,” Severtson said. “Then they have to go with donors. I’m praying and hoping that’s not going to happen. So far it’s been two years and it’s been great.”

The honor of being selected as the Honorary Chair fits perfectly with Severtson’s outlook on life.

It’s a chance to tell her story and help rally resources for those still fighting.

Severtson was nominated by Evan Sorenson, who also is a cancer survivor. She said that his nomination of her adds to the honor.

“That was extremely rewarding,” she said. “It was an honor first off, because who I was nominated by, who had cancer at the same time I did. For him to nominate me and not himself was a huge honor. It was emotional because he went through just as much.”

Now Severtson considers herself a part of a bigger family outside of her own family. It has put her in a position to help and continue to advocate with more resources behind her.

“Everybody has their own path in life,” Severtson said. “I believe my path in life is because God wanted me to go through this and help others.”

With all precincts reporting in Austin, Steve King and Jeff Austin currently lead in the mayoral primary. With mail-in ballots... read more