An Austin man who allegedly touched an intoxicated teen girl in a sexual manner made his first appearance in Mower County District Court on Thursday. 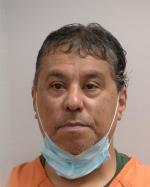 According to the court complaint, an Austin police detective was notified on July 27 that a 15-year-old girl had been sexually assaulted by Pineda, who was known to her. The victim told the detective that on May 25, she was staying at the residence of a relative. She said the relative was drinking and allowing her to drink alcohol as well. When the relative went outside to smoke a cigarette, Pineda, who was at the residence, allowed her to smoke some of his marijuana. She said she eventually got so intoxicated that she vomited. After the relative went to bed, the victim said she stayed on the floor of the living room with a garbage can next to her in case she had to vomit.

She said that while she was in the living room, Pineda got on top of her, pulled her shorts down and touched her inappropriately. She indicated she believed he wanted to have intercourse with her, so she crawled to the relative’s bedroom. She said Pineda followed her, calling her name “over and over again.” She got into the relative’s bed and slept. When she woke up the next morning, she asked the relative to get her a pair of pants because Pineda took hers off. She indicated the relative told her not to tell anyone until she could “figure things out.”

She told the detective the victim then got into bed with her and Pineda walked into the room carrying the victim’s shorts and underpants. When she asked what was happening, Pineda told her that he tried waking the victim so she would go to bed and while she was crawling into the bedroom, her shorts came off. The next morning, the victim would not talk about the incident in front of Pineda.

The detective then met with Pineda, who said he was drinking with the victim on the night of the incident and that the victim was intoxicated. He said he also allowed the victim to smoke some of his marijuana and that she eventually got sick and vomited for about 30 to 45 minutes. He then said the relative was initially kneeling next to the victim, but eventually went to bed. He indicated he finished his beer, nudged the victim, and told her that she needed to get up and go to bed. He said he then went to the bathroom and heard the victim yelling that he was touching her.

Pineda then told the detective he saw the victim getting into the relative’s bed and that he also got into the bed and they slept. He said the relative discovered the victim was not wearing her shorts the next morning and he then saw them on the floor near the bedroom door. He said he gave the shorts to the victim and did not know how her shorts came off her body. He denied touching her.

A review of Pineda’s criminal history shows prior convictions for fifth-degree assault, domestic assault, sale of a controlled substance and possession of a firearm with an altered serial number.

Pineda will appear in court again on Sept. 3.