An Adams man arrested after a property damage report turned violent made his first appearance on Monday in Mower County District Court. 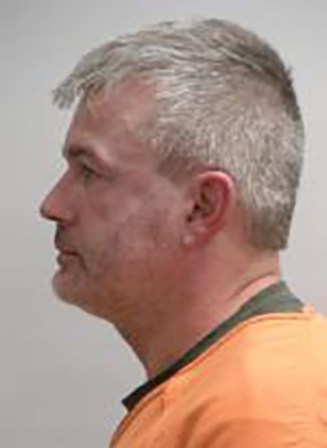 According to the court complaint, a Mower County deputy was dispatched on a property damage report on Aug. 22 at an apartment complex on Schmitz Street in Adams. An assistant manager reported that Donaldson had thrown an empty flower pot into the parking lot of the complex.

The deputy knocked on Donaldson’s door and verbally identified himself. Donaldson unlocked the door, swung it open very aggressively and said, “Who the (expletive) are you?” The deputy took a step back and ordered Donaldson to calm down. Donaldson, who was in a heightened state and was showing signs of aggression, adamantly denied throwing the flower pot and expressed his hatred of the management of the apartment complex. He said that he was sick of the harassment and told the deputy that he was going to cease the interview by shutting his door.

The deputy cleared the scene to write a report for documentation, but was advised by dispatch that Donaldson was assaulting someone at the complex. He responded back to the scene and was told by the assistant manager, “Joel attacked me.” Donaldson then exited his apartment and agressively approached the deputy and the assistant manager. The deputy told him to sit down and wait for him to talk to him, but Donaldson continued his aggressive approach and told the deputy, “I’m not putting up with this, sir” and “I’m not going to sit down.” The deputy then drew his Taser and warned Donaldson he would be tased, to which Donaldson repeatedly said “tase me.” After being told multiple times to sit down, Donaldson retreated back toward his apartment. The deputy advised Donaldson he had legal reasons to make contact with him and told him not to go back to his apartment. Concerned Donaldson might grab a weapon or attempt to take a hostage, the deputy followed him and ordered him to stop.

The deputy tried to prevent Donaldson from going into his apartment, at which point Donaldson opened the door and two dogs ran out of the apartment, attacking the deputy and biting him on his left leg near the knee.

The deputy called for back-up on his radio as he fought Donaldson and tried to arrest him. He managed to shoot the dogs with the Taser, causing them to release their grips and run away. The deputy then attempted to stun Donaldson with the Taser, but the quarters were too tight for the Taser to make contact with Donaldson’s body.

During the struggle, the deputy believed Donaldson was attempting to reach for the area of his duty belt. Believing Donladson was trying to get one of his weapons, the deputy ordered him to get off of him. At that point, the deputy had no other option but to strike Donaldson in the face, after which Donaldson turned away and the deputy was able to stun him with the Taser.

The deputy held Donaldson at Taser point while he lay in front of his apartment door. While Donaldson was lying on the ground, the deputy gave him 12 separate commands to sit down, look away, and place his hands behind his back. Donaldson did not follow the commands and the deputy deployed his second Taser cartridge via probe deployment into Donaldson’s front torso. Donaldson rolled back into his apartment and slammed the door shut. The deputy activated his Taser after the door was shut, then took a cover position on the north side of the apartment door until back-up arrived. A trained negotiator convinced Donaldson to surrender and he was taken into custody.

Donaldson said he put his dogs into a kennel, but when deputies went into the apartment to clear it, they saw the kennel pop open as one of the dogs aggressively banged its face into the door. A deputy held the door closed with his foot while the dogs tried to get out, biting at his boot. The dogs were then removed and placed in the pound for a 10-day quarantine due to no vaccination records.

A neighbor told one of the deputies the assistant manager came to her apartment and inquired about a flower pot. She said as the assistant manager was leaving, Donaldson blocked her exit and was screaming and swearing at her. She then said Donaldson went to speak to the responding deputy and she heard him swearing at him. She said she heard the deputy tell Donaldson multiple times to sit down, then telling him multiple times to stop as Donaldson tried to go back to his apartment.

The neighbor indicated the scuffle between Donaldson and the deputy moved around the corner where she was unable to see, but she heard the deputy say, “Don’t do that… why did you do that?” She also saw the Donaldson’s dogs bite the deputy, saying the dogs “were all over his legs.” She indicated one of the dogs previously bit her son.

The responding deputy had an observable scrape on his right wrist and large open puncture wounds from the dog bites that required medical treatment.

Donaldson will appear in court again on Sept. 8.

Our opinion: Doing what they can

Over these last three editions of the Herald we have been running a series by Rocky Hulne highlighting families with... read more