Born Aug. 16, 1927, in Brooklyn, New York, William Henry Thompson was the son of a single mother. Growing up in poverty, Thompson dropped out of school at a young age. Homeless during his teen years, he roamed the streets until a local minister found him sleeping in a park and took him to the New York Home for Homeless Boys. 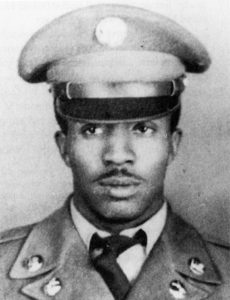 Thompson joined the Army in October 1945, though it is unknown if he enlisted or was drafted. After basic training, he was stationed in Adak, Alaska, as a machine gunner. He received an honorable discharge 18 months later; however, he found the adjustment to civilian life difficult and reenlisted in January 1948. He was assigned to the Sixth Infantry Division and served occupation duty in South Korea. He was later transferred to Company M, Third Battalion, 24th Infantry Regiment, 25th Infantry Division and served occupation duty in Japan.

Although President Harry Truman desegregated the military in 1948, the 24th Infantry Regiment consisted primarily of black soldiers led mainly by white officers. When the Korean War broke out in 1950, the 25th Infantry Division was sent to the Korean peninsula. On July 20, Pfc. Thompson and the rest of the 24th Infantry first saw combat against North Korean forces at Yechon, South Korea, at the beginning of the Battle of Sangju. The 24th captured the town; however, the Army took little notice, erroneously crediting the victory to the South Koreans.

On July 22, the North Koreans launched an assault at Sangju. Heavy enemy fire caused many in the 24th to panic and retreat despite orders to remain in place. This lack of discipline, combined with inept leadership, hampered the regiment in military engagements throughout fighting at Sangju, giving them a poor reputation. Some seized on the unit’s shortcomings as evidence that black soldiers were inferior to white soldiers.

In the days that followed, the North Koreans aggressively gained ground, driving UN forces to the Pusan Perimeter in South Korea. On Aug. 6, the 25th Infantry Division launched a counteroffensive near Masan. That night, Company M was advancing through a mountain valley near Haman when it was ambushed by a large North Korean force. As before, the overwhelming fire caused several to flee, prompting the ranking officer, 2nd Lt. Herbert Wilson, to order the remaining men to form a tight perimeter.

In the ensuing fight, Thompson was one of two machine gunners pouring on heavy fire at the enemy. When the other machine gunner was killed, the North Koreans directed their fire at Thompson. Bullets from small arms and grenade fragments struck Thompson several times, but he ignored his wounds and continued to fight, not telling anyone he had been hit.

Wilson ordered the rest of the men to withdraw. As they did so, they heard Thompson’s machine gun firing at the oncoming North Koreans, holding them off and buying them time to get to a better position. They then heard several grenade blasts, followed by a large blast, after which the gun fell silent.

Because many men had panicked and fled, division commanders largely ignored Thompson’s actions. Third Battalion commander Lt. Col. Melvin Blair did not put in a medal recommendation until Jan. 4, 1951. Thompson was posthumously awarded the Silver Star and a Purple Heart; however, realizing that Thompson’s bravery would improve the commanders’ views of his men, Blair worked to find those who could attest to Thompson’s actions.

Thompson was posthumously awarded the Medal of Honor, which was presented to his mother by General of the Army Omar Bradley, Chairman of the Joint Chiefs of Staff, on June 21, 1951. Thompson was the first black man awarded the Medal of Honor during the Korean War and the first black man since the Spanish-American War to receive the medal (this was because the courageous actions of minority soldiers during the two World Wars were awarded lesser medals or overlooked because of discrimination. Several were upgraded to the Medal of Honor in the 90s after Congress reviewed the records).

Thompson is buried in the Long Island National Cemetery in Farmingdale, New York.

For the seventh time the Hormel Historic Home welcomed a summer intern this year.  In a typical year, this intern... read more