Born Nov. 6, 1922, in Neche, North Dakota, Henry Gurke was the son of a German father and Ukrainian mother. After graduating high school in 1940, he entered the Civilian Conservation Corps. He worked for the CCC in Larimore, North Dakota, until October 1941. He then returned to Neche to be a truck driver, the job he was in when the United States entered World War II. On April 15, 1942, Gurke enlisted in the Marine Corps. 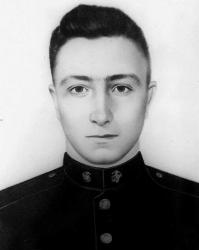 After recruit training at the Marine Corps Recruit Depot in San Diego, Gurke was attached to C Battery of the Second Separate Pack Howitzer Battalion, 22nd Marine Regiment. On July 30, 1942, Gurke was shipped overseas aboard the SS Lurline, arriving on the island of Upolo, British Samoa (now Samoa) one month later. While there, C Battery was attached to Third Battalion of the 22nd Marine Regiment. Third Battalion was then sent to Uvea Island; it was there that Gurke was reassigned to Company D of the Third Marine Raider Battalion in September.

After moving to the islands of Pago Pago, American Samoa, and Espiritu Santo in the New Hebrides, the Third Raider Battalion arrived in Guadalcanal in February 1943. The stay lasted a few days as the battalion was planning to attack Pavuvu Island in the Russell Islands. But the combat they had trained for didn’t come to fruition; the Third Raider Battalion took Pavuvu without opposition on Feb. 21, 1943.

After a brief time in New Caledonia, Company M participated in the attack against Japanese forces on the island of Bougainville (part of modern-day Papua New Guinea) in early November 1943.

At dawn on Nov. 9, three days after his 21st birthday, Gurke was in a foxhole with a fellow Marine who was manning a Browning Automatic Rifle (BAR). They were defending a vital roadblock near Empress Augusta Bay when the Japanese launched a fierce attack against their position. The BAR’s firepower proved devastating to the Japanese, who increased their grenade attacks against the two Marines.

During the fight, an enemy grenade landed in the shallow foxhole. Knowing the position would be overrun without the BAR, Gurke pushed the other Marine away and dove on top of the grenade. The explosion killed Gurke instantly, but saved the other Marine.

Gurke was posthumously awarded the Medal of Honor, which was presented to his parents, Julius and Hulda Gurke, on May 31, 1944, by Assistant Secretary of the Navy Ralph Bard during a ceremony at the Navy Department.

Gurke’s body was buried in three different locations before being brought home. He is now buried in the Neche Union Cemetery in Neche.

The Gearing-class destroyer USS Gurke was named in his honor.

Dear Annie: Since you wrote “Ask Me Anything,” I’m taking you up on it. I had known a lady for... read more