Born Oct. 6, 1925, in Gallup, New Mexico, Hiroshi Miyamura was the son of Japanese immigrants. As a child, a teacher who was unable to pronounce his first name called him “Hershey,” and the nickname stuck.

At the outbreak of World War II, President Franklin Roosevelt ordered the internment of Japanese Americans for fear they would betray the United States. Fortunately, the Miyamura Family was not living near a coastal area and was left alone. 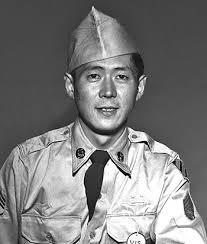 In 1944, Miyamura was drafted into the Army. He joined the 442nd Regimental Combat Team, a Nisei unit that would go down in history as the most decorated American outfit in World War II. But by the time Miyamura arrived in Italy, the war was over. After serving occupation duty in Italy, Miyamura returned to Gallup and started working as an auto mechanic while serving in the Army Reserves.

When the Korean War began in 1950, Cpl. Miyamura was sent overseas as a machine gun squad commander in Company H of the Seventh Infantry Regiment, Third Infantry Division. Miyamura saw combat at the Battle of the Chosin Reservoir and in the defense of Seoul, South Korea, from advancing Chinese forces.

On April 24, 1951, Miyamura and his squad were on a hill near Taejon-ni, south of the Imjin River. They had been ordered to hold the hill against Chinese forces, who had attacked along the Imjin two days earlier, forcing the Americans to withdraw across the river. Miyamura had 15 men – five riflemen and 10 machine gunners – to stand against the Chinese. Some of his men were South Korean conscripts who disappeared when night fell. They were not expected to last; they were only there to buy the withdrawing forces time.

That night, Miyamura and his men heard the Chinese forces banging on pots and blowing whistles. After a brief silence, a flare went up and the Chinese attacked. With only two machine guns and a few rifles to defend against the onslaught, Miyamura’s squad was in danger of being overwhelmed. When a mounting Chinese force threatened his flank, Miyamura fixed a bayonet to his rifle and charged the enemy, killing over 10 Chinese soldiers and buying his squad time.

Miyamura returned to his machine gun as a second wave of Chinese soldiers attacked. When his weapon jammed, he disabled it before the enemy could capture it, then bayoneted his way to the second gun. He then told his few remaining men to withdraw and that he would cover their retreat.

Miyamura continued fighting the Chinese, holding out against several waves until he could no longer continue. Unaware that Miyamura was still fighting, American forces began throwing phosphorous bombs at his position. As he began to fall back toward the American lines, he encountered a Chinese soldier with a grenade. Miyamura bayoneted the soldier, causing him to drop the grenade. The explosion embedded shrapnel into Miyamura’s legs, making it difficult to walk. He stumbled toward the American position until he could go no further. After crawling into a ditch, he lost consciousness.

The next morning, Miyamura came to with a Chinese officer standing over him. “Don’t worry,” the officer said, “we have a lenient policy.” After a 300-mile forced march, Miyamura spent the next 28 months in a Communist prison camp. During that time, he lost 50 pounds, endured torture and brainwashing, and watched many fellow soldiers die.

On Aug. 23, 1953, Miyamura was released and taken to “Freedom Village” near Panmunjon, North Korea. Upon his arrival, Brig. Gen. Ralph Osborne, commander of “Freedom Village,” asked if he was Cpl. Hiroshi Miyamura. Thinking he was going to be court-martialed for losing so many of his men on April 24, 1951, Miyamura was stunned to learn that he had been awarded the Medal of Honor and promoted to Sergeant. Osborne told him that his medal was classified as “Top Secret” when the military learned he had been captured.

“If the Reds knew what he had done to a good number of their soldiers just before he was taken prisoner, they might have taken revenge on this young man. He might not have come back,” Osborne told a group of reporters.

Miyamura’s medal citation was signed by President Harry Truman and presented to Miyamura by President Dwight Eisenhower on Oct. 27, 1953.

Miyamura left the Army with the rank of Staff Sergeant and returned to Gallup, where he owned a service station and worked as an auto mechanic. He is active in the Wounded Warrior Project and activities involving youth. He was awarded the 2014 Director’s Community Leadership Award by the FBI’s Albuquerque office for his work with youth and is the namesake of Gallup’s Hiroshi H. Miyamura High School. On Memorial Day 2018, his story was portrayed during the National Memorial Day Concert at the US Capitol in Washington, D.C.

The League of Minnesota Cities thanks the State Legislature and the Governor for their work to pass the Police Accountability... read more