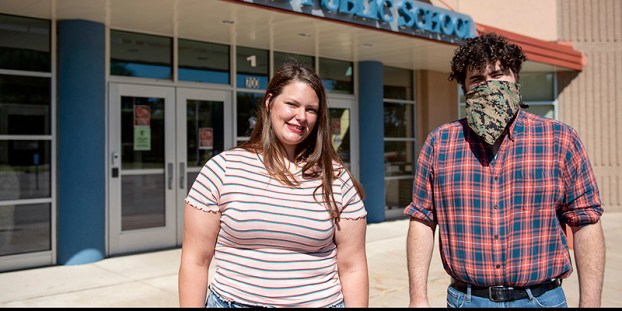 Lyle High School’s Emma Wilde, who will be a senior this coming year, and her teacher from last year, Tyler Amick, stand outside Lyle Public School Wednesday morning. Wilde, who took Tyler’s class on flags, had her design for an official Lyle flag chosen by the mayor and city council. Eric Johnson/photodesk@austindailyherald.com

The community of Lyle has added a symbol to its community with help from Lyle Public Schools students.

The Lyle City Council recently adopted an official flag that represents its community and it was tied directly to a class on flags this past year taught by Tyler Amick. 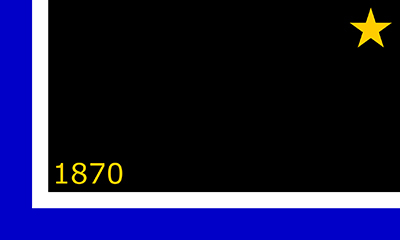 Amick’s idea was to not only teach a class on flags, but uniquely work in a project that would come up with a design for what he hoped would be the new symbol of the community.

“I knew I wanted to teach a flags class and I wanted them to work on flag design,” Amick said. “The mayor of Lyle (Gary Harrison ) was a bus driver at Lyle Public Schools. I went to him and asked if it would be cool if the students designed a flag for Lyle.”

“(The students ) were super interested,” Amick continued “That’s a real deal project where they can take what they learned and actually use it.”

The project ended up being the capstone to the elective class taught by Amick, who is licensed to teach language arts and social studies.

As part of the class, each student was asked to come up with a design after giving careful thought to the project.

“I wanted them to make conscious choices about colors and symbols and be aware of what those symbols could mean,” Amick said.

To that end the class followed the guidelines set out by Ted Kaye in his book “Good Flag, Bad Flag.” In the book, Kaye gave five principles of a good flag design.

• Use two to three basic colors

• No lettering or seals

• Be distinctive or be relateable

After the students came up with their designs, they turned to their peers for judging of the final projects.

“I had my students go through and look at the final flag design and pick out the ones they liked the most. Which ones they thought best represented Lyle,” Amick said. “Five were sent to the city council.”

Then junior Emma Wilde’s design was eventually chosen and features a black flag with a blue L-shaped blue stripe along the left side and bottom. A gold star in the upper right-hand corner puncuated the design.

“I wanted to have something obviously representative of Lyle,” Wilde said. “The L-part that came from Lyle. I added a star because I wanted something to show that Lyle has a bright future. The star also kind of reminds me of unity and I feel like Lyle is a united community.”

The idea of the students creating the flag struck a chord right away with Harrison and the rest of the city council.

In their eyes it was a reflection of city pride and an important step to include the students in their community.

“I thought it was a fantastic idea that these kids wanted to take the initiative to design these flags,” said Harrison, who has been mayor of Lyle for close to four years.

And while the city council liked the design, they wanted to work with Wilde to see if she would be opposed to adding one more element to it in order to recognize the 150th celebration, which ultimately had to get pushed back to next year because of the COVID-19 pandemic.

“The only thing that we kind of talked about and changed her design just a touch is somewhere we wanted 1870 on there to let them know when Lyle originated and our 150th,” Harrison said. “She had a beautiful flag designed.”

Wilde welcomed the input from the council.

“My original flag did not have that and I was okay with them adding it,” Wilde said. “It was a good idea and it was good working with them and having them involved.”

One of the best things to come out of this is the example by which the school and its students could become directly involved in their community, something that Lyle’s mayor and the city council have attempted to do whenever they get the change.

“We have pushed for student involvement at every turn,” Harrison said. “Our kids and our school, I am so proud of them. They step up and take care of each other.”

Wilde hopes that this project and the adoption of the flag can carry on down the line.

“If I was a younger kid and I saw Lyle had a flag and a high school class made that, I would feel like the younger generation has a lot to say and they can do a lot,” she said.

Sumner Elementary prepares to welcome back students under the uncertain shadow of COVID-19   There’s no doubt that this year’s... read more