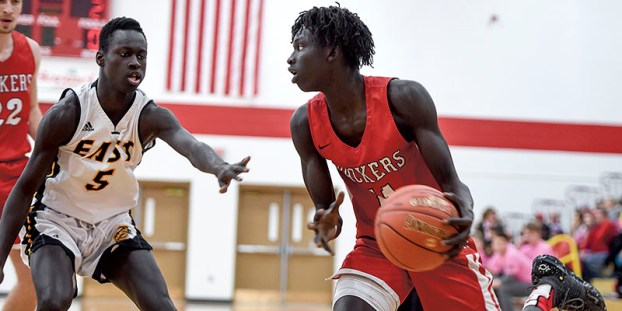 Austin grad Agwa Nywesh is hoping his second choice is his best choice.

Nearly three months after he decommitted from Division I Idaho State University, Nywesh has decided to go the junior college route as he has committed to play basketball at Western Nebraska Community College, a Division I NJCAA school located in Sidney, Neb.

While he knew he had plenty of college opportunities, Nywesh had an uncertain recruiting experience, taking place in the midst of the same COVID-19 pandemic that ended Austin’s basketball season back in March.

“It’s been a little difficult with the recruiting,” Nywesh said. “I wasn’t able to go on visits, but I stayed patient. My brother (Ajuda) told me to see it out with all of the schools.”

Nywesh likes what he has heard from the Cougar coaching staff, telling him they want to see him grow as a player and a man. They also spoke with Nywesh’s family to get better acquainted with him.

While he knows where he will play for the next two years, Nywesh still has dreams of playing at the Division I level and he would love to transfer to an NCAA Division I school after playing at WNCC.

He’s already spent a good portion of his summer working on his game as much as possible.

“I felt that I can tap into another zone and I can work even harder than I did last year,” Nywesh said. “If I stay disciplined, the sky’s the limit.”

After playing off the ball as a shooting guard for much of his career, Nywesh made the full switch to point guard this winter and blossomed as Austin’s floor general. He averaged 14.7 points, 3.1 rebounds 4.3 assists and 4.2 steals per game in just his second season on the varsity team.

Nywesh will have to adjust to a lot of new faces at WNCC as Tayler Johnson, a Minneapolis North grad, is the only Minnesota native on the Cougars’ roster last season.

He’ll also have to adjust to small town living as Sidney’s population is less than 7,000.

One thing Nywesh is sure about is the support the Cougars have in town and it’s something he’s excited to be a part of.

“Their community is all in about their program just like it was in Austin,” Nywesh said. “When the community gets involved, that means something. I’m going to try my hardest. I’m going to inspire before I aspire.”

WNCC finished with a record of 19-12 overall last season.

While safety has been the number one concern during the COVID-19 pandemic, mental health has also been a top priority... read more