From left, Gina Nesvold will run with her dad Kelly as part of the 30 for freedom on the Fourth of July. Rocky Hulne/sports@austindailyherald.com

Nesvold will continue his push against human trafficking on Independence Day

In the middle of a pandemic, when he hasn’t been able to work out as much as he normally would, he’s still going to push his body to the limit for a cause he is highly passionate about.

Nesvold will be celebrating Independence Day the best way he knows how — by raising funds for those who have lost their freedom. After previously fighting human trafficking with a 100-mile run and a 300-mile triathlon, Nesvold is going to run 30 miles this year. His seven-year-old daughter Gina will accompany him for three of those miles.

Nesvold hadn’t planned on putting together a fundraiser, but he eventually gave in and found a safe way to do it without drawing a big crowd.

“We weren’t going to do anything, but I felt really compelled,” Nesvold said. “Even though there’s so much going on in the world and so much unrest, I just felt like there’s all of these people out there who are still being trafficked and they’re being pressed to do things that we wouldn’t normally see or hear about in our sheltered area. I want to at least try and contribute in some way.”

Nesvold got the idea of doing 30 miles from his friend Brent Silkey, who had 30 friends run 30 miles on his 30th birthday to raise $30,000 to fight human trafficking. Nesvold, who works at Wellness First Chiropractic in Austin, would be happy to raise $2,000, and he has a chance to do that after Mark Jenkins of Total Fitness said that the Desperate Tears organization would match the first $1,000 that Nesvold raises. 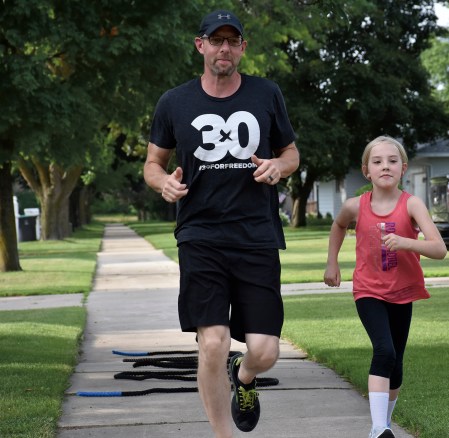 Kelly Nesvold, left, and his daughter Gina are going to run to fight human trafficking on the Fourth of July. Kelly will run 30 miles and Gina will run three miles. Rocky Hulne/sports@austindailyherald.com

Nesvold’s fund will go to Venture Expeditions, a non-profit organization out of the twin cities that rescues and rehabilitates victims of human trafficking.

“They’re amazing people,” Nesvold said of Venture Expeditions. “Literally every dollar that people give goes out and makes a difference. There is zero overhead and that’s what we love about it, because a lot of times you give and a decent percentage of that goes to operation costs.”

Nesvold is a little worried about the forecast of 90 degrees for Saturday, but he knows that he’ll have all of the motivation he needs in Gina — who will be running alongside him for a half-mile every five miles. Nesvold’s drive will come from her and his other two children as he looks to fight against human trafficking.

“I just can’t imagine anything happening to them. It’ll help to motivate me and it will help teach them to do something bigger than themselves, which translates into life,” he said. “We’ll be able to teach some life skills while also being able to do some wonderful things for people that are suffering.

Nesvold will be running outdoors and he may post a couple social media updates during his run.

As of Wednesday, Nesvold had raised a total of $924.

To donate to Nesvold’s cause, visit the following link :https://venturemiles.org/fundraiser/48a866e9-6a41-4c93-bb59-e93cdf8bf927?fbclid=IwAR2h2m7kn8CWEw1dZ8aNsYg3TNGVhRhbXxnx32WQem36GbLrgu4w_uoyMvI. 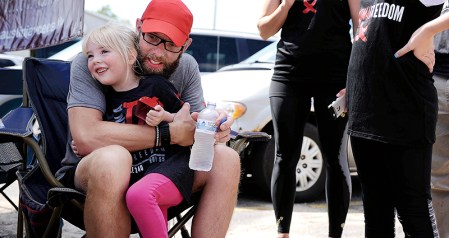