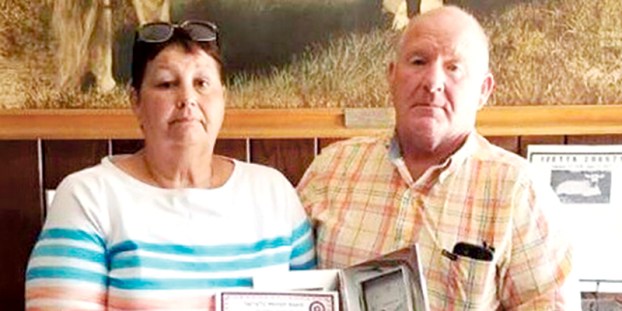 Reads Brown Swiss of Lyle has recently been recognized by the Brown Swiss Cattle Breeders’ Association as the recipient of a National Award for their Brown Swiss dairy herd.

The Protein Genetic Herd Award was awarded to Reads Brown Swiss and is presented to the herd with the top genetic level in the past year based on Actual PTA protein of all cows with the same herd code calving within the past two years.

Owned by Roger and Lori Read and family, the Reads have been milking dairy cattle for 31 years. Currently, they are milking 130 head of Brown Swiss and have an additional 145 of young stock.

“We’ve worked our way through the identity program with several grade Swiss to be where we are today,”  said Lori.

The Reads chose the Brown Swiss breed because of their docile nature and because they can handle a variety of weather changes.

“In Minnesota, we have extreme heat and extreme cold. We don’t pamper our cows, yet they produce well,” she explained. “It’s a commercial herd, not a show herd.”

This award has four divisions based on herd size. The Read’s herd falls into Group 4, milking over 100 registered Brown Swiss cows. This is the second year in a row the Read family has won this award.

The Reads breed their Brown Swiss cows for milk protein and butterfat. They use the net merit index when evaluating and breeding their cattle as they believe it is even across all breeds of dairy cattle.

“Net merit is a level playing field,” Lori said. “As is Energy Corrected Milk. I don’t care about how much fluid milk—it’s the components in the milk that pay.”

The Reads have been genomic testing all the females on their farm since 2014.

Crews are making steady progress on the construction at Albert Lea’s Riverland Community College campus, as students are expected to... read more