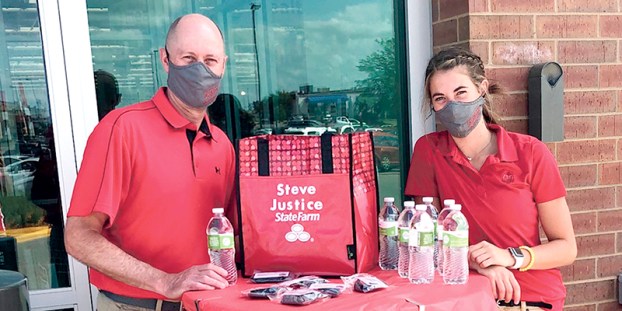 Justices team up to hand out masks

It was a typical sunny July afternoon this past Monday, and Colie Justice was doing something she could not have imagined five months ago.

Colie was standing next to her dad, Steve, outside of Hy-Vee handing out free protective masks in the midst of the COVID-19 pandemic, which has recently escalated across the country.

The Justices were giving out the masks, which were made at Games People Play, as part of State Farm’s program to give back during the pandemic. Steve works as a state farm agent and his office has been in lockdown since March.

“There’s a lot of uncertainty for everybody,” Steve said. “The most important thing is everybody’s health and we’ve just got to kind of react. In the last couple of weeks it’s really taken off across the country. I’m sure that has a lot to do with the Fourth of July, people traveling and people putting their guard down.”

While some young people across the country have taken a laid back approach to the pandemic, Colie has made wearing a mask a priority when she’s out in public. She hopes that her peers follow suit.

“I think masks are super important,” Colie said. “With me being younger, kids are kind of taking advantage of not wearing them. They say ‘I’m not going to get sick.’ I wear one because I feel bad for the older people that it’s affecting. I always try to wear one every time I go somewhere to protect other people and myself as well.”

One of the last times Colie stepped foot in Austin High School was when she scored 31 points to reach the 1,000-point career barrier in a playoff win over Faribault. She has committed to play hoops at the University of Wisconsin-River Falls, which is where Steve also played basketball, and she’s been trying to keep things as normal as possible.

She has worked out in a makeshift crossfit gym in the family garage and utilized the hoop in her driveway to get shots in. Steve has served as her personal trainer.

“I’ve definitely adjusted and I’ve taken advantage of my time not being able to do anything else. But it’s definitely been weird,” Colie said. “Our family has grown closer through this and it’s going to be even harder to leave for school in the fall now. As of now, (UWRF basketball season) is still a go. We’re keeping our fingers crossed.”

Steve and Colie both had the experience of representing the Packers in the state basketball tournament and they both feel for all of the students who may not be able to get back to school in the fall.

“I really feel for the kids. Over the years now, it seems like so much is going on during the summer,” Steve said. “Last year we were out of town for AAU for 11 weekends in the summer. It’s not just sports, but kids are losing summer job opportunities as well and the fall is a big question. It’s really sad. I think we can all hang in there for awhile, but to keep your guard up for a long time gets hard.”

The Justice’s handed out approximately 60 masks on Monday and they said the response was generally positive. Masks are becoming more and more common as the city of Rochester requires people to wear people in them public buildings and Walmart also will begin requiring masks on Monday.

2020 Farm Family of the Year demonstrated commitment to ag

The Andree family, consisting of husband and wife Richard and Margaret and children Catrina and Dawson, of Brownsdale, Minnesota, has... read more