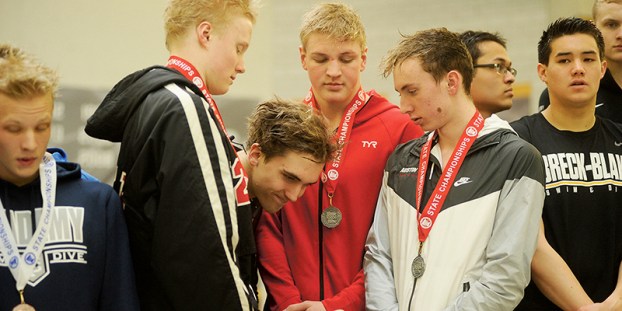 The Austin 200-yard medley relay team of Logan Kelly, Aaron Knoll, Trey Myers and Rafe Dolan Peterson receive their second place medals at the Minnesota Class A State Swimming and Diving Meet at the University of Minnesota this past winter. Herald file photo

It takes a lot of courage and stamina to jump into a cold pool and swim until your arms are about to fall off while holding your breath for as long as possible.

A group of Austin swimmers not only have made a habit of doing this, they were among the best in the nation this past winter.

Kelly’s breaststroke time of 55.19 seconds was the 32nd best time in the nation and Ethan Dang of Hazen High School in Renton, Washington, had the top time of 52.76 seconds.

Kelly also received All-American recognition for the breaststroke during his sophomore season and the Packers have taken home four All-American nods since the recognition started being handed out in 1998. It is the first time a Packer relay team has scored the honor — making this group of swimmers a special group.

It will most likely be a long time before the Packers feature the talent in the pool that they had this winter as Kelly, Dolan Peterson, who will swim at the University of Wisconsin-Green Bay next year and Myers and Knoll showed up every day with a strong work ethic that forced their younger counterparts to push hard to keep up.

Although he has one more year of high school swimming remaining, Kelly was full of genuine emotion shortly after the Minnesota Class A State Swimming and Diving Meet when he knew he had swam with the senior trio for the last time. Kelly still has a lot of big races ahead of him, but it won’t be the same without his long-time friends and teammates lined up next to him every day in practice.

The bond these swimmers created throughout their time as teammates is as strong as any I’ve seen in Austin and their legacy will certainly be one that lasts well beyond their time at AHS.

Riverland Community College went through a spring without sports and now it is going to miss out on the fall... read more