A special bond played a crucial role for the Austin Greyhounds as they topped the Rochester Roadrunners 7-1 in Marcusen Park Sunday night.

Yean Carlos Gil was on point throughout the night as he struck out 13 in eight innings with his brother-in-law Nestor Jimenez behind the plate.

Jimenez is a former Riverland and Blue Sox player, but he helped bolster the Hounds when he brought Carlos Gill to the team last summer.

“He has a really great background and it’s an honor for me having him pitching for the town and the community. It worked out perfect where we can play together,” Jimenez said of his brother-in-law. “We always have a good time together. Sometimes we have a bad time, but we never show it. We always get work done.”

Before he arrived in Austin, Carlos Gill pitched for six seasons in the Minor Leagues as he finished with a record of 19-32 overall with an ERA of 3.64 while playing for affiliates of the Atlanta Braves.

On Sunday, he was showing a lot of the stuff he has learned from playing baseball at the Class A level.

“I tried to throw hard and work on my command. I was throwing down and away. My two seam and my breaking ball were working,” Gill said. “We’re working hard and my teammates are really great. It’s a lot of fun. We’ve got it together and everybody’s good. I like playing here.”

The Hounds (5-3 overall, 4-1 League Play) put the game away when Jordan Hart blooped a two-out, two run single to make it 5-1 in the eighth inning. 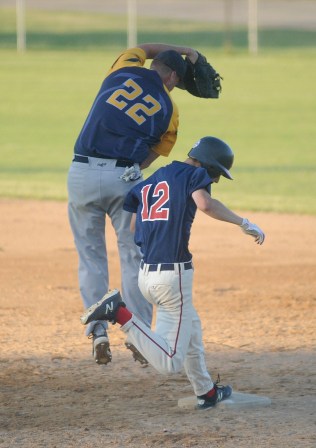 Austin’s Jack Dankert lands safely at first base on an error by Rochester in Marcusen Park Sunday night. Rocky Hulne/sports@austindailyherald.com

Break out the gloves