BLOOMING PRAIRIE — Ranell Kittelson wasn’t necessarily planning on coming back to Blooming Prairie after she left to play college volleyball at Minnesota State in the fall of 2000, but she’s sure glad she did.

Ranell is one of many BP grads who are proud to tell others that they are  Awesome Blossoms.

“I am thankful every day that my life brought me back here to raise my children here. It really wasn’t the plan, but I’m very thankful that it ended up this way,” Ranell said. “To have them be Blossoms themselves is awesome. It’s kind of a cliche, but we always say It’s better to be a Blossom than to be beaten by one. I’ve grown up pretty proud of the mascot and the community is very supportive. It’s amazing.” 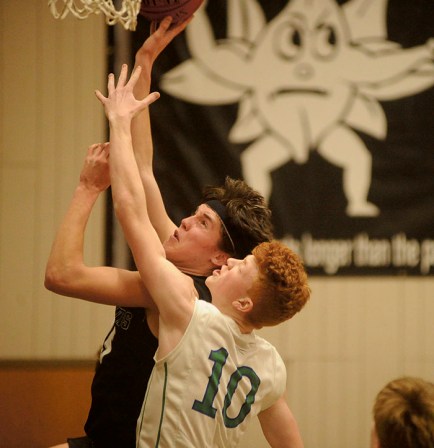 Blooming Prairie’s Drew Kittelson drives to hoop in front of the Awesome Blossom logo this past winter. Both of Kittelson’s parents were Blossoms themselves and they both work in the BP school district. The Awesome Blossoms were voted as the second best nickname in Minnesota on an online MSHSL poll this week. Herald File Photo

Ranell moved to BP when she was a first grader due to her dad’s job as a hog farmer. When she moved back to town after two years on the Maverick volleyball team, she continued her education. She has been teaching in the BP school district for eight years.

“It’s so fun to see my kids grow up here,” Ranell said. “There are quality kids and families here and I think that makes us special. The coaches and educators are close knit and they care so much about our student athletes. My kids have had great experiences here.”

Drew and Anna’s dad Matt is also a BP native and he coaches the baseball team and is an assistant coach on the football team.

The Awesome Blossoms recently took second to the Moorhead Spuds for the best nickname in Minnesota. The vote was posted by Minnesota State High School League information specialist John Millea and it garnered 6,872 voters. The Spuds topped the Blossoms by a count of 50.4 percent to 49.6 percent, but nobody in BP is feeling like a runner-up.

BP athletic director Ali Mach said it was a little hectic as BP ran through the brackets of the poll, which initially featured all high school mascots in Minnesota.

“It’s been a lot of fun, but it kind of got a little stressful in the last 48 hours,” Mach said.

Mach has worked in BP for 17 years and she coached the softball team to four straight state tournaments and a state championship in 2013. She said that everyone in BP is proud to be a Blossom.

According to the research of the late LeMar Nelson, a long-time teacher at BP and former writer at the Steele County Times and BP Times, BP earned its nickname in the 1900s when the Austin newspaper wrote about contests between the two schools and called BP ‘The boys from Blossom town.’ In the late 1950s and again in 1966, when the BP boys basketball team made it to the state tournament, students attempted to change to a more ferocious nickname. Both attempts failed.

BP’s current logo was introduced in 1979 when Tom Ressler drew it in art class. That’s when the Blossoms became the Awesome Blossoms.

In Austin, Southgate Elementary second grade teacher Traci Braaten still remembers her time in BP. She graduated from BPHS in 1989 and she had 78 students in her class, which allowed her to create some strong Blossom bonds. To this day, BP’s smaller class sizes make the community close and supportive for anyone who calls themselves an Awesome Blossom.

“Every different group of friends was supportive of each other, and there was always great support for all of the activities, sports, music and plays,” Braaten said. “That support continues when you see how the current residents and alumni who don’t live there anymore still return for big events. I still keep in touch with many classmates. Once an Awesome Blossom, always an Awesome Blossom.”

MLB players begin reporting for tests as first workouts near

Yoán Moncada has spent the past couple of months working out in what he called a “controlled and limited environment”... read more