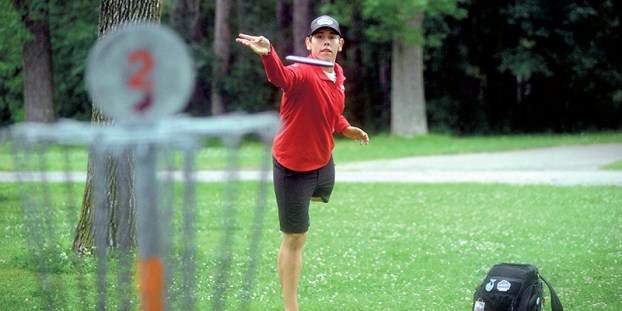 Jordan Castro is back at Todd Park. His demeanor is calm, but his mind stays busy.

The 2012 Austin High School grad turned disc golf pro still has visions of the tornado that hit Todd Park in 2009. He thinks of his father who passed away four years ago, and he’s often reminded of his 200-pound weight loss over the past five years.

Castro began playing disc golf in middle school when he made a habit of riding his bike from his home near Southgate Elementary to either Dreisner or Todd Park to play a round. Castro lost 100 pounds that summer and he gained a passion for a sport that has taken him all across the country and into the hearts of many of his fans. 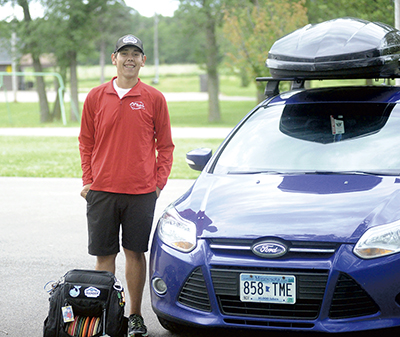 Austin grad Jordan Castro has spent a bulk of his time on the disc golf course or driving to disc golf tournaments over the past 10 years. He is now a full-time pro in the sport and is looking to keep it growing in Austin and beyond. Rocky Hulne/sports@austindailyherald.com

Castro, who still drives the same car he had in high school, has been to 48 states and he has played disc golf in 35 of them.

He spends the colder months in Phoenix and returns home to Austin for much of the summer months. Castro competes in pro tournaments and he also makes a living off his sponsors. Throughout his career, Castro has hit over 100 aces, including one from 450 feet out and some worth big crash prizes at tournaments.

“I wasn’t expecting to do all of this with the sponsors and everything. But now I get to travel and play,” Castro said. “I don’t know what I would be doing without it. I’ve met so many people. I’d love to play in a tournament in every state. We’re getting there and we’re getting close.”

Castro tries to find a tournament to play in every weekend, which made the COVID-19 shutdown difficult for him. He spent his time practicing, hiking and working on his cooking.

Watch Castro play disc golf and you’re not going to see a lot of emotion out of him, but you’re going to see a full arsenal from one of the top players in the country. He is the second rated player in the state of Minnesota and his career best rating of 1,022, which is based on his tournament performances, puts him amongst the top 50 in the Pro Disc Golf Association.

Castro turned pro in 2015 and disc golfing is now his full-time job. While he had to wait three months during the COVID-19 pandemic to get started this season, Castro came back on a high note as he took eighth place in the Preserve Championship in Clearwater, Minnesota, on July 3-5. That performance qualified him for the USDG championship, where he has competed a few times in the past years.

“I’ve never done my best there,” Castro said. “It’s hard because you want to do well and you want to put on a show for everybody. The courses get harder and harder each year and everyone’s so good. You just look at each shot one at a time. I play the best I can. Obviously there are people who are way better than me, but I have to stick to my own game plan because I can’t copy anybody.”

When Castro hits the course, he’s well known as the disc golfer who lost a lot of weight. While disc golfing has helped him shed the pounds, he’s also made adjustments to his diet and he hasn’t had a soda in nine years. Plenty of fans and players alike have sought advice from Castro as his inbox receives about 25 to 30 messages per day for advice on weight loss and disc golf.

Castro’s motivation to lose weight came from his family, especially from his father Luis, who passed away four years ago.

“I’ve stayed active and I switched my diet too. It gives me more energy when I’m walking up hills and things like that,” Castro said. “As a family, we kind of noticed what we ate. My family was big and we kind of lost weight as a family. My mom did it, my dad did it, my brother did and then me. It was super cool. It inspired me to focus on health and diet.”

Castro has seen the game of disc golf grow in the past 10 years and the pandemic has certainly increased the number of people playing the sport as it is affordable, anyone can play it and it is easy to social distance while disc golfing. Amir Garrett of the Cincinnati Reds and ultimate disc player Brodie Smith have both taken up disc golfing as a side sport.

Part of Castro’s role as a pro is to attend clinics with younger kids to get them playing the sport.

He’s also doing his best to help boost the sport in Austin. He is part of the ATARI disc golf club, which is made up of a group of local disc golfers who are focused on making improvements to Todd Park and Driesner Park over the next couple of years.

“This is one of the first times we all came together as a group,” Castro said. “I have a lot of knowledge from the courses I’ve seen and this is where I grew up, so I want to help out. When they need funds, I can write them a check from my earnings. Todd Park is our gem.”

As for that tornado in 2009, Castro had just finished off a win on league day when his mom called him. Before he knew it, he was pretty close to re-enacting a scene from the movie “Twister.”

“We outran the tornado. We could see it in our rear view mirror,” Castro said. “We came back the next day and trees were down everywhere.”

That tornado scare never kept Castro away from disc golf and it’s likely nothing else will keep him from the sport that has changed his life in his big ways. He’ll continue to be out on the course, being the best he can be.

Baseball has taken Teyghan Hovland all across the country, and now it’s taking him to college. Hovland, who will begin... read more