There are plenty of things in this world that lend themselves to mystery: the pyramids, Easter Island, Stonehenge, and in Austin, the Anderson family.

Three members of the family, Lowell Anderson, his son Jeff and Jeff’s son Evan, have an interesting sort of math between the three of them that is practically unheard of.

And to know this math is to understand the years involved with the three, all of them graduates of Austin High School. 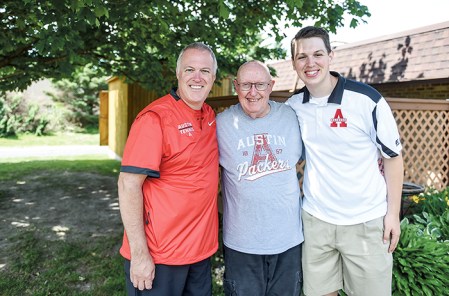 Three generations of Anderson that include Jeff (dad), Lowell (grandpa) and Evan (grandson) have an interesting tale to tell that’s a rare sort of math. Eric Johnson/photodesk@austindailyherald.com

Solve for X, or in this case, maybe solve for the odds on how this came to be.

One thing is for sure, it wasn’t planned.

“It’s nothing we planned, it just happened,” Lowell confirmed. “Why it happened, I don’t know.”

Clearly, there’s nothing strange about graduating within the time frame allowed in our equation. But in this case rather, it’s in the years in which they occurred.

Look again: Lowell born in 1935, graduated in 1953. Probably not so rare, but when you look at Jeff and Evan, you get the same sort of pattern, and it gets a little weird, especially when you add in the extra bit that Lowell started his job at the Hormel print shop in 1969 and, you guessed it, retired in 1996.

While this quirk of life probably won’t bring a party to a standstill, it has been a fun piece of trivia.

“I have told some of my friends about it,” Evan said. “It’s just kind of a funny thing. You bring it up in conversation. It’s something cool to talk about.”

This oddity of numbers has been in the minds of all three for a while, so the overall revelation isn’t new.

In Jeff’s case, he was able to connect the dots through his life and his son’s life. It became particularly noticeable when Evan was young.

“I remember when Evan was in kindergarten and it was announced this would be the class of 2020,” Jeff said. “How ironic is it that three of us would have a similar thing?”

Over their combined lifespans, the three have formed a pretty personal connection to history as well. Not just the changing of things over time, but to some pretty specific periods of time.

Lowell just missed on being drafted for the Korean War, though he would eventually end up serving, while in 1986, Jeff graduated during the Hormel strike, and Evan, well he graduated in the year 2020, the year of COVID-19.

It’s a connection that’s not lost on the family.

“When I turned 50 I was the same age dad was the year of the strike,” Jeff said. “I just remember thinking, at that age, to go through that trauma, how difficult that had to have been.”

“I was in vocational school at the high school and when I graduated I went to work for the Herald,” Lowell said. “Hot metal linotype to the computer age. I got out right before then.”

Jeff, too, has seen the change in technology over his years 29 years in education. It revolutionized the schools themselves and the way education was delivered.

“It’s completely changed,” Jeff said. “Just the technology aspect of it. Being able to adapt to technology revolutionized what we do.”

Evan suspects that the technology change will continue during his continuing years.

“It will probably be a lot more change than what it is now,” he said. “The tech is going to get bigger and better (or smaller and better maybe). Things I think of now I can’t even comprehend is what is going to be in the future.”

But for now, the three of them have a pretty good story to tell and it’s a story that very few families can claim.

“I just think it’s kind of random and interesting,” Jeff said. “It’s something that makes us a little bit unique.”

Mower County and the City of Austin are starting to formulate plans on how to use money distributed to them... read more