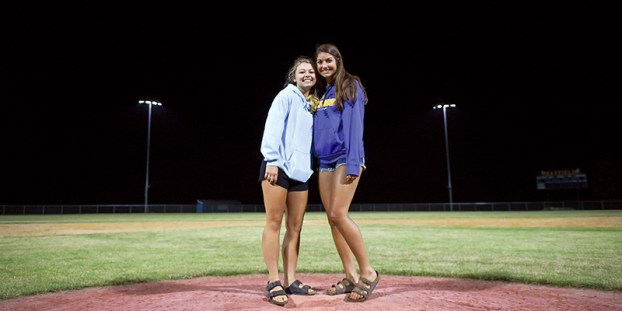 Madi Lubbert, left, and Taylor Burt have been team managers for the Hayfield baseball team as long as many of the players and so when COVID-19 took sports away, it took baseball from them as well. Eric Johnson/photodesk@austindailyherald.com

A part of the team

HAYFIELD — It is a rare thing for high school baseball teams in Minnesota to have a designated manager.

It is even more rare for a team to have managers as dedicated as the Hayfield baseball team has for the past four years.

Recent grads Madi Lubbert and Taylor Burt have been in the dugout with the baseball team for the past four years and they’ve taken their jobs quite seriously. During the high school season, when pitch counts are crucial to a team’s success, Lubbert and Burt tracked the counts and would often run out of the dugout to keep umpires and coaches updated. They also handle the tasks of running the scoreboard and keeping the books, allowing the players to concentrate on the game. 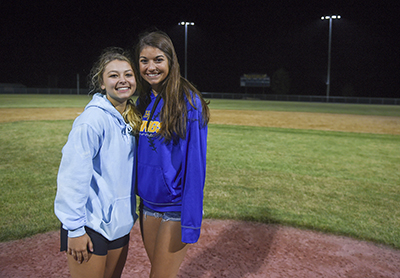 Like any of the players, Burt and Lubbert, have become part of the team.

It all started when Burt and Lubbert began attending games during their freshman season and Hayfield head baseball coach Kasey Krekling asked them if they wanted to help out with the team.

“We were like ‘of course.’ We took it very seriously. We rode the bus, we went to every game and went down to Florida with the team,” Lubbert said. “We give them advice. I don’t know if it’s helpful, but we try our best.”

While they’ve never put on a uniform, Lubbert and Burt have earned their peers’ respect. They’re always supportive in the dugout and they’ve even been known to step out on the field and play catch with players in warm-ups.

Kolby Tapp, a recent Hayfield grad, said Lubbert and Burt have been vital to the team.

“They help us out a lot. We’re very fortunate to have them. You can have a manager, but it’s very important to have a good manager that you can trust. They are our teammates,” Tapp said. “I’m sure some kids on our team don’t even know how to do the book because we’ve never had to. We’re lucky to have managers that have always done it.”

Lubbert and Burt are soaking up their final summer with the Hayfield 18U baseball team and they’ll continue jotting down stats and making noise until Hayfield’s season ends in a couple of weeks.

Both managers have had a blast in the last four years.

“We cheer them on. We just like watching them and supporting them,” Burt said. “They always make us feel like part of the team.”

A desire to teach

The Austin School Board has no shortage of experienced members and come Nov. 3, voters will have to choose another... read more