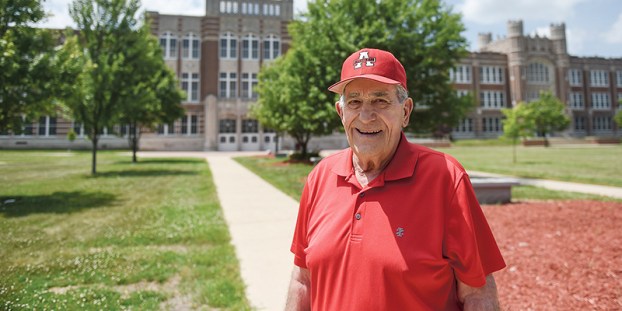 A love of education

There are those in every town that are easily recognizable simply by hearing their name. Don Fox is one of those people.

This past June, Fox made it official that he was retiring from the Austin Public Schools Board, capping a career in education that has spanned eight decades across three different states.

“I just go on because I wanted to be more a part of being a mentor and leader and teacher,” Fox said.

Fox came to Austin in 1970 as a physical education teacher, football coach and counselor, but his career started before that.

Fox, a 1954 graduate of Rochester Lourdes High School in Rochester, went onto the University of Detroit in Detroit, Michigan, where he also played football.

He graduated and married his wife Marlene in 1957 and taught in the Detroit area until 1965, when he moved to Sioux Falls, South Dakota.

While in Sioux Falls, he coached at the city’s Catholic School, Sioux Falls O’Gorman, for three years and taught at Sioux Falls Lincoln for two years.

“They couldn’t get rid of me,” Fox joked.

However, from 1993 to 1998, he made the move to administration when he became principal at Southgate Elementary. He admitted it wasn’t the job he was looking for, but he was glad he took it.

“I wanted a different position than what I took, but I took the elementary,” Fox said, going on to say how much he enjoyed working with the staff, the students and the parents. “Excellent teachers and many of the students’ parents were interested in doing different kinds of things for us. I loved Southgate, I loved the high school.”

Fox technically retired from his position at Southgate and walked away from 23 years in education and coaching, but there was still a pull that kept him coming back to education.

For a three month stint in the 2003-04 school year, he became interim principal of Sumner Elementary School and then later in 2004-2005 was principal at Hayfield High School.

Then, after another year off, Fox was elected to the school board for the first time, holding his care until this year, when he will step away from his current term on Nov. 2, the day before the general election.

Marlene, a paraprofessional herself for 25 years, always saw the dedication her husband had for the school.

“He’s still a champion of the teachers,” she said. “Always has been. They’re the best and he always strived for his teachers.”

It’s something those around him have seen as well. Carolyn Dube, current chair of the school board, is in her first term, but she always knew she had the support of Fox.

“It’s truly been an honor to work beside him,” she said. “He and Dick Leas, they were always very vocal in support of me to move into that chair position.”

However, outside of education circles, Dube has known Fox for a long time and even before their shared time on the board, she knew what kind of person he was.

“I’ve actually known Don since I was a kid,” she said. “He and my dad always went fishing together so I’ve known Don for a long time and I could say so much about him. It’s always been evident that he has a big heart for the kids in the district. It was a natural progression for him to be a voice on the board.” 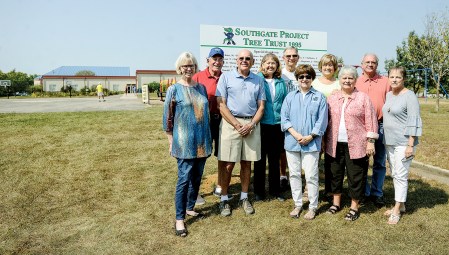 Some of the original Southgate Elementary School’s Tree Trust, including Don Fox (second from the left) are photographed in front of the sign marking the occasion in 1995. Fox was a principal of the school from 1993-98. Herald file photo

ne of the things that’s stuck out to Fox for all of his years in Austin Public Schools is not only the care its staff and administration have shown toward its students, but also the support from the community surrounding it.

“The business people and the big companies have backed the school systems immensely,” Fox said. “We appreciated all the people that I have worked with in the school. They helped with the weightlifting gym and summer programs for the football students and other athletes. The businesses in town and the parents … it’s opened it up for us to be able to do those types of things.”

That kind of will to work with people was something that has touched on APS Superintendent David Krenz, who was hired by the district when Fox was board chair in 2008. The next year was Krenz’s first and he remembered Fox as being a valuable resource as he began his time.

“Don’s leadership has been instrumental in helping me get acclimated with the school and community,” Krenz said. “He’s always wanted the best for the kids and to make the district the best it can be.”

What has also been invaluable to the school was the dynamic of different experiences that included Fox’s many years in education and administration.

“To have that dynamic you have with multigenerational members is something you rarely see these days,” Krenz said.

But perhaps one of the things that has made a lasting impression of the education in Austin is the education their own children received. All three, including one with special needs, has gone through the Austin School District.

“We’re very happy with the education our children got at different stages of their time,” Marlene said.

Dube said that Fox’s retirement will create a hole at the board table, especially taking into account all of his time, knowledge and experience, but she will remember what he was able to contribute from his time on the board and how it always came back to the students.

“It’s just nice knowing that we’re all on the same page,” she said. “When we are having conversations, it’s for the good of the school district.”

The dedication has also been good for the community.

“His dedication and commitment, not only to the schools, but to Austin has been tremendous,” Krenz said. “Just his involvement in the community has been fantastic.”

By Emily Bright Sonya Lewis has big plans for when her older son comes to visit. “We’ll have all of... read more