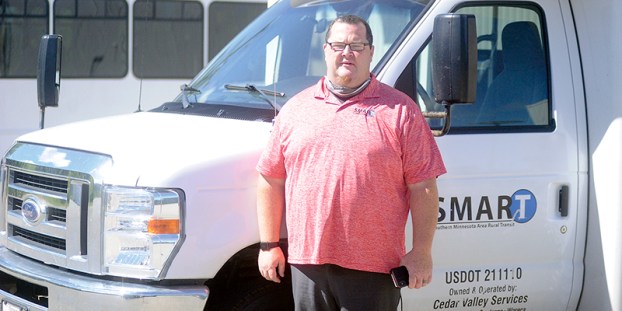 Kevin Hemann has stepped up for SMART Transit during the COVID-19 pandemic as he has delivered meals to seniors in need. Rocky Hulne/sports@austindailyherald.com

A focus on helping

Kevin Hemann is used to dropping off preschoolers, but he’s had to make drastic adjustments to his job over the past four months.

Hemann, who is the Lead Driver at SMART Transit, has made it his main focus to get food to seniors during the time of the COVID-19 pandemic. He has helped organize the delivery of up to 900 miles per day and he’s even driven a route that includes 95 meal deliveries.

Hemann has been a public transportation driver for 15 years, but this has been his first experience as a food delivery driver. He has walked through snow, rain and sunshine from his truck to hand meals to seniors.

“My job changed dramatically,” Hemann said. “Now I know what a mailman feels like.”

Hemann has also helped prepare meals on Saturdays with his daughter and his sister has also spent plenty of time helping out with meals at the Senior Center.

Like most people in the world, Hemann’s job and life went through a major shift in March. He had been responsible for making sure 300 preschoolers made it to school every day, but now he’s had to make sure seniors are fed throughout the pandemic.

“When we started in March, I remember that you couldn’t even see a car drive down main street,” Hemann said. “People would be so grateful when we delivered the food to them. That little interaction of bringing them their food was the only interaction they’d have with a person all day.”

Hemann and his wife, who works at the courthouse, are both essential workers, and he is thankful that Kid’s Corner was able to watch his daughter while he and his wife worked throughout the pandemic.

“The unknown was just so scary in the beginning,” Hemann said.

Chris Thompson, who is the transit operations manager at SMART Transit, said that the entire staff had to step up during the pandemic, and Kevin helped out big time by driving on Monday through Friday for all 100 days of food delivery

“It was a good opportunity for us to do something positive for the community and our drivers were still able to work,” Thompson said. “Kevin does an amazing job of trying to get as many kids as he can to preschool efficiently. He was pretty instrumental in the whole meal delivery, also. It was 100 days of craziness. The whole company was involved and we had dispatchers and managers going and helping out.”

As SMART Transit has slowly returned to providing transportation, Hemann is hoping that he can get back to driving preschoolers around. He’s also grateful that he was able to step up in a community effort that helped keep Austin going amidst a global pandemic.

“I felt really good about helping the community out and it’s been nice to give back,” he said.

The community of Lyle has added a symbol to its community with help from Lyle Public Schools students. The Lyle... read more