Born Jan. 29, 1908, Bruce Avery Van Voorhis grew up in Fallon, Nevada, where he graduated from Churchill County High School. In 1925, he entered the U.S. Naval Academy at Annapolis, Maryland. The 1929 edition of the U.S. Naval Academy yearbook, “Lucky Bag,” stated that Van Voorhis, known as “Van,” “Chicken,” and “Brute,” spent most of his time during Plebe summer “teaching the city slickers from the East the correct pronunciation of ‘Nevada.’” It also noted, “THEY (sic) discovered Van out in the wilds of Nevada, saw that the Navy could not do without him, and made him a midshipman.” 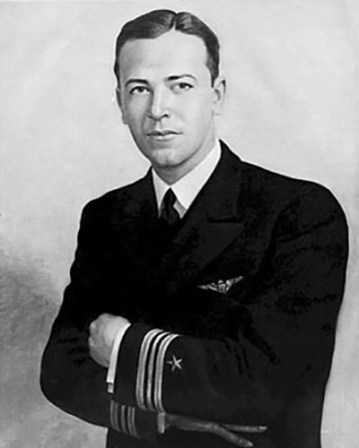 After graduating in June 1929 as an Ensign, Van Voorhis briefly served on the battleship USS Mississippi before being selected for aviator training at Naval Air Station Pensacola. He became an aviator in 1931 and served on the battleship USS Maryland as part of Observation Squadron 4B. He was then assigned to the aircraft carriers USS Ranger and USS Saratoga as a member of Bombing Squadron 5B and Bombing Squadron 2B, respectively. He was later stationed at the Panama Canal with Patrol Squadron 2F before serving on the carriers USS Enterprise and USS Yorktown and the light cruiser USS Honolulu. He was stationed at Naval Air Station Anacostia in Washington, D.C. when the United States entered World War II.

In December 1942, Lt. Comm. Van Voorhis briefly took command of Patrol Squadron 14 before being made commander of the 102nd Bombing Squadron (VB-102), a squadron of PB4Y-1 Liberators. On May 1, 1943, VB-102 arrived at Carney Field on the island of Guadalcanal in the Solomon Islands. During the invasion of New Georgia, VB-102 bombed Ballalae Island to destroy a Japanese airfield built by British prisoners who were executed after its completion.

As Allied ground forces battled the Japanese on New Georgia, VB-102 continued its support by searching for Japanese ships and airfields in the Solomon Islands and nearby island chains. From June 25 through July 4, the squadron encountered 43 enemy ships and 51 enemy aircraft; Van Voorhis and his crew destroyed a Japanese cargo ship, destroyer and destroyer escort heading for New Georgia on July 4.

In the early morning of July 6, 1943, Van Voorhis volunteered to fly a lone reconnaissance mission to observe the Kapingamarangi Atoll, also known as Greenwich Island, located in the Eastern Caroline Islands, about 700 miles from Guadalcanal. Taking off at about 4:20 a.m., it was the last time VB-102 would ever see their commander.

When Van Voorhis’ Liberator came over the lagoon at Hare Island in the Kapingamarangi Atoll, it was immediately met by Japanese anti-aircraft fire. Van Voorhis and his crew launched six ground level bombing runs against the Japanese forces, destroying a vital radio station as well as several anti-aircraft batteries and installations.

With each bombing pass, he was forced lower and lower as enemy aircraft pursued his Liberator. Van Voorhis shot down one enemy aircraft and strafed three seaplanes while they were grounded.

On the last bombing run, Van Voorhis deliberately flew low to make sure the last bomb would hit its target. It is unknown if the plane was caught in the bomb blast or was overwhelmed by enemy fire, but after the last run, the Liberator crashed into the lagoon, killing everyone on board.

An Australian coast watcher witnessed the attack and reported the actions of Van Voorhis and his crew to the Navy. Van Voorhis was posthumously promoted to Commander and awarded the Medal of Honor. His co-pilot and crew were posthumously awarded the Navy Cross and Distinguished Flying Crosses, respectively.

Van Voorhis’ remains were later recovered and he was buried in the Jefferson Barracks National Cemetery in St. Louis County, Missouri. He also has a headstone marker in Arlington National Cemetery.

Our opinion: The right decision

It certainly couldn’t have been an easy decision, but at the end of day the Mower County Fair Board’s move... read more