Born May 26, 1920, in Omaha, Nebraska, John Joseph Parle was a student at Creighton University when the United States entered World War II. He enlisted in the Naval Reserve on Jan. 11, 1942, as an Apprentice Seaman. After graduation, he began Midshipman training at Notre Dame University. On Jan. 28, 1943, Parle was commissioned an Ensign in the Naval Reserve. 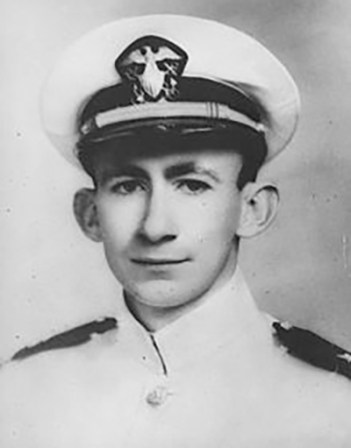 He was briefly stationed in Norfolk, Virginia, before being transferred to the USS LST-375, a landing ship of the Northwest African Amphibious Force. At the time, Allied forces had recently defeated Axis troops in North Africa and were planning the next phase of the war in the Mediterranean: an invasion of the “soft underbelly of Europe” that would begin with an attack on the Italian island of Sicily.

Dubbed “Operation Husky,” the invasion of Sicily was to begin with a paratrooper night attack and an early morning seaborne invasion. American forces would land at or near three port cities along the island’s southeast coast: Licata, Gela and Scoglitti. LST-375 was assigned to carry men and equipment of the U.S. Third Infantry Division for the attack at Licata and Parle was appointed Officer-in-Charge of Small Boats.

In the early morning hours of July 10, 1943, Allied ships of Vice Adm. H. Kent Hewitt’s Western Task Force were in position six miles off the coast of Sicily. The ships had arrived undetected; Axis forces on the beaches had no idea that a seaborne invasion was imminent.

Aboard LST-375, Parle suddenly noticed a smoke pot, a device used to create smoke screens, had accidentally been ignited in a small landing craft. To make matters worse, the boat was loaded with high explosives, detonating fuses and ammunition. If an explosion was to occur, it would not only damage the ship, but could potentially alert the Axis forces of the fleet’s presence.

Thinking quickly, Parle entered the craft despite the blinding, dense smoke. He was able to snuff out the fuse, but failed to extinguish the fire in the pot. Parle then grabbed the pot and, with choking smoke suffocating him, got topside and hoisted the pot overboard. His actions saved LST-375 and allowed the fleet to maintain its secrecy.

Parle was transported to a Naval hospital in Tunisia, where he died a week later from pneumonia exacerbated by the smoke inhalation. His body was returned to Nebraska, where he was buried in the Holy Sepulchre Cemetery in Omaha.

For his actions, Parle was posthumously awarded the Medal of Honor.

On March 25, 1944, the Navy launched the Rudderow-class destroyer escort USS Parle, named in Parle’s honor. The Parle served in the Atlantic and Pacific during World War II.