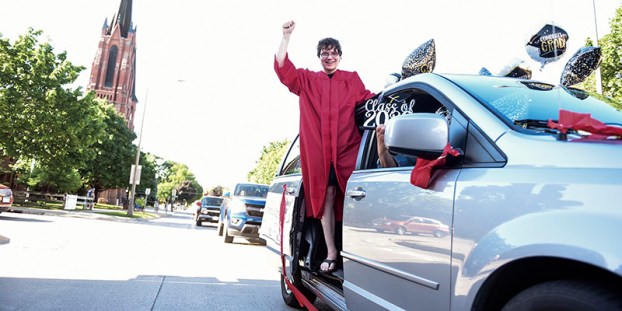 On March 6, the first positive case of COVID-19 was confirmed in Minnesota. It marked the first in a very long line of positive cases to come over the next three months.

Just a couple weeks later, places in Minnesota began coming up with plans to  move forward and that included schools, which were now looking at having to deliver education through distance learning.

Toward the end of the month it was announced that schools would officially be closing and education would indeed switch over to distance learning; however, Riverland Community College had already made the decision to shutter its doors.

On March 16, classes at all three campuses in Austin, Albert Lea and Owatonna were suspended in response to the growing pandemic. Not long after, the facilities were completely closed.

“Very quickly we moved most of our instruction online,” said Riverland President Dr Adenuga Atewologun. “We already had kind of a head start even before the coronavirus because a third of our classes were fully online. We’ve been using a hybrid for most of our classes.”

Even with that advantage, though, those things that couldn’t be moved online, including truck driving, cosmetology, nursing and radiology among other classes, were affected.

“We had a challenge to fully deliver instruction so that student learning would not be compromised,” Atewologun said.

It was a juggling act that most all institutions had to cope with at every level. While technology helped, the move to distance learning presented a challenge to administration alike.

Kane Malo is the assistant principal at Pacelli Catholic Schools and on July 1, he will become principal and athletic director. Malo’s first day on the job was the same day that the state closed schools.

“It was a wonderful way to start as an administrator,” Malo joked.

Pacelli’s challenges were familiar to those in education as well as parents.

“We did have those challenges,” he said. “We did packet pick-ups, pre-k through third grade. Fourth through 12th grades we had one-to-one Chromebooks with Google classroom to get most of the materials and take their tests.”

All of these challenges tested school systems already in place as well as any plan that was brought to the process to make distance learning as smooth as possible. In many ways, these plans worked.

It’s important to keep in mind that these plans the schools came up with were only conceived in just around a two-week time period.

Across the street, Austin High School Principal (and Kane Malo’s wife) Andrea Malo looked back at the time they did have.

“When we learned that we were going to be closed, the Minnesota Department of Education and governor worked together to provide us with two weeks of time to put plans in place,” Andrea said. “We also had our spring break time in there as well. It really gave us about one and a half to two weeks to put a plan into place.”

Schools made primary use of programs like Schoology, but even still it tested the boundaries.

“At the high school, systems were in place and we were set-up for distance learning,” Andrea said. “We’ve put a lot of time into developing Schoology. Staff and students were familiar with Schoology, just ever as a main platform.”

One of the aspects of all of this that helped smooth the situation out a bit was the involvement of parents, who were especially key at Pacelli.

All things considered, school districts and Riverland finished the year about as good they could have.

In Austin, commencements were able to be held in some fashion or another, even if it wasn’t traditional.

“We successfully finished the academic year,” Atewologun said. “Because of the COVID response, we couldn’t do our commencement on May 15 to May 29. It was beautiful. I’m really proud of our staff and faculty.”

Atewologun credits the decisive action by the college in giving them a leg up in the process.

“That was the big part,” Atwologun said. “ We have made an attempt to be preemptive so we’ve been pretty much ahead of the curve in making our decisions. In uncertain times making a quick decision and sticking with it is important.”

“We didn’t doubt where we were going,” he continued. “We closed our doors by April, even before the governor’s stay at home order. It was quick and determined. We didn’t have to go back and forth.”

It’s not that the situation was completely negative either. During this process, schools learned what was possible. Some of those things learned can be taken forward into coming school years.

“I think through all of this, we were challenged by something new,” Andrea said. “I know for myself, I like to be able to look at things and analyze it from a number of different angles. I didn’t have that this time.”

“We did find things that were really successful as teachers and leaders,” she continued. “Sometimes you just need a little bit of a nudge.”

The other side of this; however, showed that time in a classroom is still important and at AHS, school officials were hearing that from both sides of the desk.

“I think the one thing we heard over and over again from the kids and staff is they really missed being here,” Andrea said. “They missed the interpersonal interactions with one another. Maybe they liked sleeping in, but they missed the routine. They miss being able to be in the same room as their teachers.”

Just this week, in a letter to the media, the Minnesota Department of Education said it would be releasing to school districts and charter schools guidelines on how to plan for the upcoming school years.

Planning will be broken down into three scenarios:

• Return all students to school buildings following the most current CDC and MDH guidelines;

• Return students to school buildings implementing a hybrid model following the most current CDC and MDH guidelines; or

The letter also indicated that the MDE, along with the MDH and governor’s office, would announce what model it would be following by July 27.

Until then, school officials will plan the best they can with a bunch of unknowns.

“I do a check out each year with the staff: What’s going well? What have been the challenges? What areas can we help you move forward?” Andrea said. “What we’re hearing is ‘what does next year look like? What is that plan? I tell them as soon as I know, I will let you know.”

With guidance from the Diocese of Winona-Rochester, Pacelli plans on opening its doors to students this fall.

“We’re working on a plan to open our doors and welcome students back,’’ Kane said. “How do we make sure of the cleaning regiment to keep out kids safe.”

Meanwhile, on the college level, Riverland has already made the first step in a segmented process. On June 1, buildings opened to employees and on July 1, Austin and Albert Lea campuses will open to the public at a single entry and exit point, followed by Owatonna doing the same on July 15.

“Our vision is to provide every enrolled student the best opportunity to obtain their career and educational goals,” he continued. “We recognize people need a different kind of instruction other than online.”

Lessons learned are not just in the classrooms. Administrations have taken something from this as well and recognize the coming challenges in the face of an extremely fluid situation.

Among other things, that includes making sure no student has taken any steps backward during all of this.

“I think the biggest challenges, especially when we come back in the fall, is to make sure to fill gaps kids had this spring from not being in school,” Kane said. “What steps did we miss and how can we fill them and keep kids moving forward.”

It’s a sentiment shared by those across the street.

“I think we’ve done a lot of talking about what we learn from this,” Andrea said. “I think we learned a lot about things of how we can approach teaching and learning. What are those systems and practices we can use at the beginning of the year with students using those tools in place.”

Above all else, these practices by schools showed the necessity of communication with all parties involved.

“For me personally, the biggest lesson is keep in touch with students,” Atewologun said. “Find a way to see what student needs are. If we know that ahead of time, if we know what that is, we will be able to plan ahead of time.

Hulne: The magic of an era

Oftentimes when I drive through Hayfield, I am reminded of “Hoosiers,” which is one of my favorite movies. There are... read more