Our Opinion: Fox an example of public service

On Monday, during the Austin Public Schools Board final meeting of the school year, it was announced that Don Fox would be retiring, leaving his seat up for grabs in this coming election.

We would like to commend and thank Fox for his dedicated service to the APS district, not only during his four terms on the board, but his time as an educator, first as a teacher and then principal of Southgate Elementary. 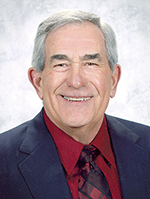 Fox has been a familiar site in Austin schools over the years, known for his passion for the wellbeing and education of the district’s students.

He was involved and engaged and always very approachable, often taking time to listen and talk with people about concerns in the district or about successes of Packer sports.

We hope that his service to the school district serves as a model for those seeking to fill his seat: Dedicated with a will to work toward continued student success.

However, this is also a good time to urge those who are considering running for office such as school board to throw your hat in the ring. Serving in this capacity puts you hands on in helping guide a district like Austin that has done so much for its students.

If you have ever had the desire to be a part of your community, then we hope you will give running for school board a thought. Schools are improved when citizens take part.

Al Batt: We’re all happy to see the world again

Echoes from the Loafers’ Club Outdoor Meeting My Uncle Pete put signs reading “87” all over his lawn. Why did... read more