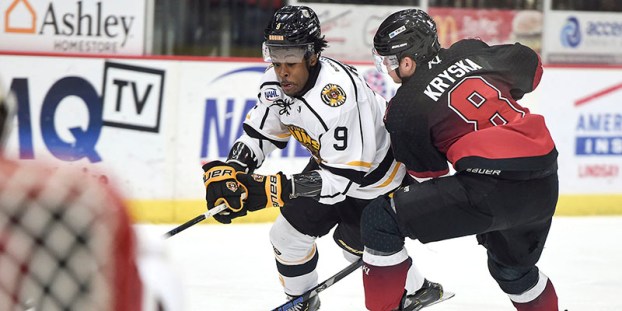 Austin’s Dante Sheriff tries to work around the Minnesota Magicians’ Blake Kryska during the second period in 2019. Herald file photo

New teams under the Bruins and Grizzlies will benefit Austin hockey

The Austin Bruins are taking the next step to build up hockey in Southeast Minnesota as they are preparing to form the Southern Minnesota Bears, a U16 and U18 AAA fall team.

Austin Bruins co-owner Craig Patrick said the time is right to give area high school hockey players a chance to work on their game before the winter season begins.

“These teams will be in place to help our local guys be more competitive, because they’re at a big disadvantage if they don’t have more time on the ice,” Patrick said. “Leagues like this have existed in the twin cities for a long time and this is a way for southern Minnesota guys to have great coaching and great competition without having to do a lot of driving around.”

Players on the Bears will get a chance to learn from the Bruins and Rochester Grizzlies coaching staffs and they will have a chance to compete in tournaments against other hockey prospects.

Patrick said the Bears will not interfere with high school or youth hockey and he’s excited about the potential of the team.

“It’s a great opportunity for guys in southern Minnesota,” Patrick said. “We’re hoping we can get something going that is very long.”

The Bears will play in the North American Prospects Hockey League newly formed Fall League. Three currently scheduled events will take place in Duluth on Sept. 4-6 and in Blaine on Sept. 17-20 and  Oct. 16-19.

Music from the lot

Cedars continues to bring entertainment to its residents   Kent Larson grew up believing in the magic of music, and... read more