This month Jupiter and Saturn dominate the evening sky, while Venus climbs into prominence as a predawn planet.

Venus comes out higher in the east every day, freeing itself from the sun’s foreglow. On the 3rd, our brilliant sister planet begins a 10-day glide across the face of Taurus, the bull, represented by the V-shaped Hyades star cluster. On the 12th, Venus passes just one degree, or two moon widths, from Aldebaran, the eye of the bull, which is not part of the Hyades. Hanging above the action is another star cluster: the Pleiades. Venus crossed the Pleiades in April, before plummeting out of the evening sky. Don’t miss the show on the 17th, when a waning crescent moon joins Venus and Aldebaran. 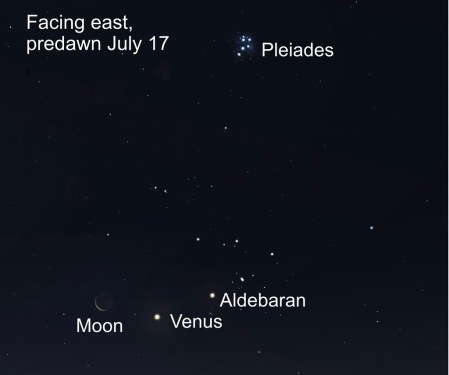 Jupiter and Saturn are low in the southeast at nightfall. Much brighter Jupiter and the ringed planet both reach opposition this month, when Earth laps them in the orbital race and they appear opposite the sun in the sky. Jupiter’s opposition comes on the 14th, Saturn’s on the 20th. Both planets now trace low arcs across the sky each night because in summer, our hemisphere is tilted toward the sun and thus away from any planet opposite, or nearly opposite, the sun.

But Mars will be fairly high at its October opposition because by then we will tilt more toward the night sky than toward the sun. As its opposition date approaches, Mars brightens daily, but it’s still a morning planet. By month’s end, though, it just manages to scrape over the eastern horizon by midnight.

July’s full moon arrives shortly before midnight on the 4th. Between 10:07 p.m. and 12:52 a.m. that night, the moon’s uppermost part undergoes a penumbral eclipse, where Earth blocks some sunlight from reaching the moon. This eclipse will be so slight that only the sharpest eyes will notice it.

Also on July 4, Earth reaches aphelion, its farthest point from the sun. At that moment we’ll be 94.5 million miles from our parent star and traveling most slowly in our orbit. Because Earth reaches its minimum speed in the northern summer, it takes longer to get through this part of our orbit. As a result, in the Northern Hemisphere, spring and summer together last several days longer than fall and winter. In the Southern Hemisphere, it’s the opposite; spring and summer there are shorter than fall and winter.